Derevyanchenko: People Don't Know Me; Must Show What I Got

Sergiy Derevyanchenko understands that his livelihood is at stake Saturday night.

If he defeats Daniel Jacobs, he’ll have leverage by becoming a middleweight champion. Title unification fights and seven-figure paydays await if the unknown Ukrainian can win the most difficult fight of his four-year pro career.

Their 12-round, 160-pound championship match also is a high-profile opportunity for the undefeated Derevyanchenko to impress fans who might not be all that familiar with him. 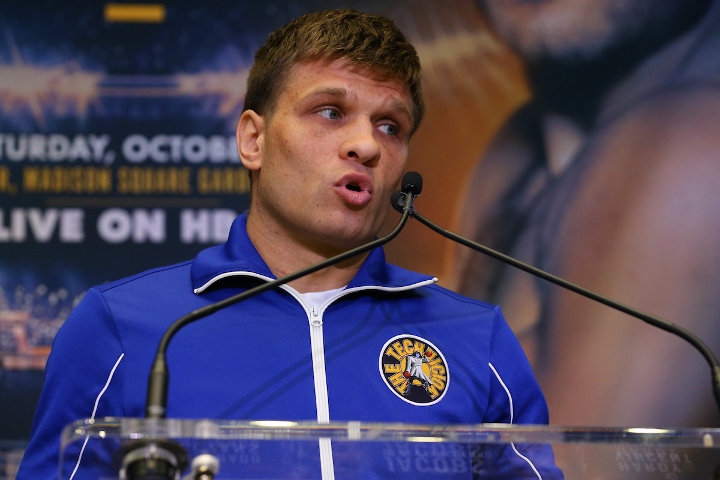 HBO will televise Derevyanchenko-Jacobs as the main event of a “World Championship Boxing” tripleheader from The Theater at Madison Square Garden in New York (10 p.m. ET/PT).

“This is my first fight [on] HBO, my first big fight,” Derevyanchenko told BoxingScene.com. “I must show the maximum of what I’ve got, because people don’t know me. I want to look good in this fight.”

The top-ranked Derevyanchenko, 32, and the third-ranked Jacobs, 31, will fight for the unclaimed middleweight title the IBF stripped from Gennady Golovkin four months ago. The IBF took Golovkin’s title away from him June 6 because he didn’t adhere to the stipulations attached to the exception the IBF granted him to fight Vanes Martirosyan, rather than making a mandatory defense against Derevyanchenko, on May 5 at StubHub Center in Carson, California.

Derevyanchenko (12-0, 10 KOs) and Jacobs (34-2, 29 KOs) are extremely familiar with each other. They’re stablemates who’ve sparred more than 300 rounds since Derevyanchenko moved to Brooklyn in 2014.

Neither Derevyanchenko nor Jacobs were about to allow their trainer predicament to stand in the way of a title shot.

“This is my dream,” said Derevyanchenko, who won 390 amateur fights. “This can change my life. I want this belt. My family wants it, my team wants it and I want it. It can take me to the next level in my career and get me a big fight.”

Derevyanchenko has fought just once since he stopped Tureano Johnson (20-2, 14 KOs) in the 12th round of their August 2017 bout to become the IBF’s mandatory challenger for Golovkin. The 2008 Olympian stopped Dashon Johnson (22-23-3, 7 KOs) after the sixth round of that fight March 3 at Barclays Center in Brooklyn.

“I feel good,” Derevyanchenko said. “Now my dream has come [Saturday]. I can fight for a title and now I’m happy. My career moved slowly, but I’m happy.”

So they've already fought the equivalent of over 25 bouts...

[QUOTE=mcdonalds;19227509]Jacobs has a deal with HBO and is the clear A side here. IF chenko wins he could possibly go back to Showtime/Fox and build up a big fight with Charlo down the line.[/QUOTE] The fight was ordered. Haymon and…

[QUOTE=Bardamu;19227502]The fact that Showtime and Haymon let hbo get this fight, shows me that they are not confident in Derevyanchenko. I'm not either. I'm rooting for Derev, but I will be surprised, to say the least, if he wins tonight.[/QUOTE]…

The fact that Showtime and Haymon let hbo get this fight, shows me that they are not confident in Derevyanchenko. I'm not either. I'm rooting for Derev, but I will be surprised, to say the least, if he wins tonight.