Derevyanchenko Hopes To Knock Jacobs Out, Make a Statement

Jacobs, 34-2 with 29 knockouts, will be out to impress against the Ukrainian, who is unbeaten in 12 professional fights with 10 wins inside the distance.

"I feel like I'm the strongest middleweight that he has stepped in the ring with professionally," said Jacobs, a cancer survivor nicknamed "Miracle Man". 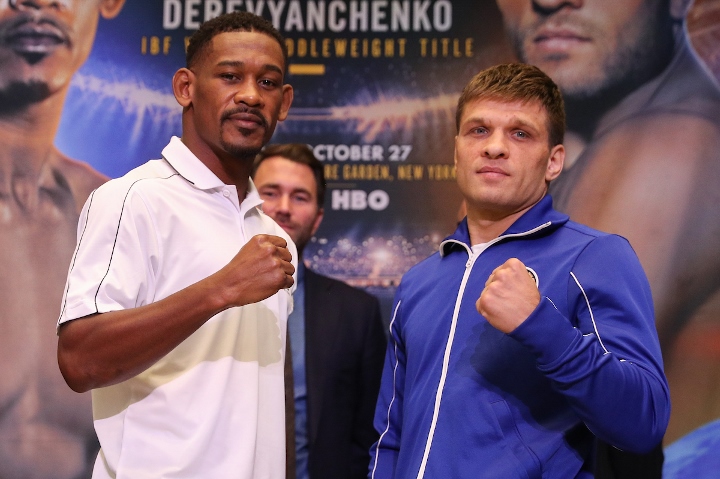 His career almost ended in 2011 because of osteosarcoma, a rare form of bone cancer. He made a full recovery but spent 19 months out of the sport while battling and recovering from cancer.

"I feel like that I have the advantages when it comes to the mental aspect of the experience of knowing I can go full 12 solid rounds with the best of them and compete at an all-time high level," Jacobs said. "I mean, I know that. I have it in my bank, I have it in the gas tank already.

"A guy that's inexperienced with only 12 fights, I would presume that it would be a second guess on his behalf."

The bout brings Jacobs back to Madison Square Garden, where he lost a decision to Gennady Golovkin in a middleweight title tilt in March of 2017 but became the first fighter to take Golovkin the distance.

With a win on Saturday the 31-year-old can regain a 160-pound belt and move closer to a bout with Alvarez next year.

But Derevyanchenko is hoping that he's able to secure a knockout victory.

"If it has to go the distance, I'm ready because I've trained for it. But, of course, I would love to try to end the fight sooner with an exclamation point, like I would always try to do, more so that the fans can have the excitement and give the fans what it is that they want," Derevyanchenko said.

"I never actually goes in and search for the knockout. What happens is I've trained my whole life to throw combinations the way I throw them and it just becomes automatic at some point. And when the punches start throwing and those combinations land, the knockouts happen."

Alvarez hasn't spoken about who he might face in a May 2019 bout, but promoter Oscar De La Hoya has mentioned Jacobs, Callum Smith and Jermall Charlo as possible foes.

[QUOTE=MrShakeAndBake;19224834]Ummm Canelo went up to 168lbs to phukin’ duck EVERYONE: jacobs,derev,ggg,charlo. why are you speaking ?[/QUOTE] Canelo is still the linear unified middle weight king pin... I speak because I can... Why? What's it to you?

I wouldn't be surprised if SD KOs Jacobs. He looked vulnerable against Sulecki, a blown up welterweight.

Eddie hearn spent $89 on the promotion of this fight, he literally spent all his time talking about wilder, fury, tank davis, canelo, etc

[QUOTE=Robi13;19224174]Lol just like canelo vacated (ducked to gggroupies) the belt to make more millions in the first canelo vs bbb fight right?[/QUOTE] Ummm Canelo went up to 168lbs to phukin’ duck EVERYONE: jacobs,derev,ggg,charlo. why are you speaking ?

[QUOTE=robbyheartbaby;19224348]don't post that s*** on this forum pal you'll get exposed. Derevyanbumko is a nobody and you know it name one decent opponent he's faced without Googling his name punk. I'll be waiting.[/QUOTE] You should go watch his fights. He…