It wasn’t pretty but Sergiy Derevyanchenko got himself back in the mix for a world title shot.

Derevyanchenko defeated Jack Culcay by unanimous decision (116-112, 116-112, 115-113) in a IBF middleweight title eliminator at the Armory in Minneapolis during the Peter Quillin-Caleb Truax PBC undercard on FS1.

Although Derevyanchenko didn’t do much to hurt Culcay, he was rewarded for being the aggressor after a slow start to the bout. Culcay, however, landed the biggest shot of the fight when he stunned Derevyanchenko with a straight right hand in the 10th round that sent him back to the ropes. 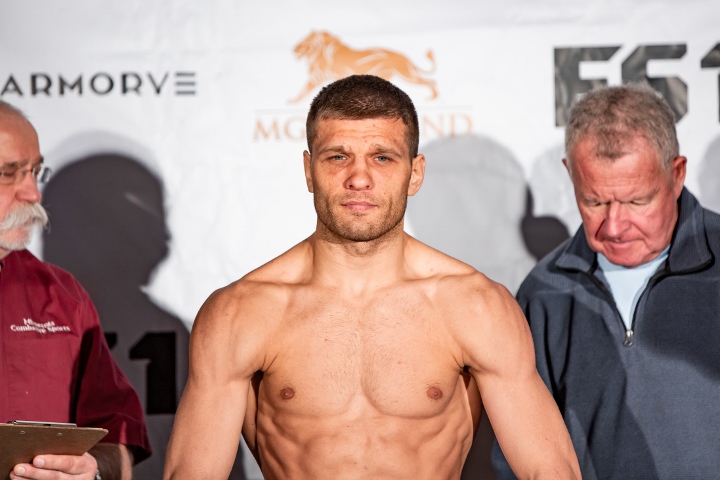 Derevyanchenko picked up the pace in the fourth by attacking Culcay with combinations. But his aggressive style led to Culcay landing a body shot that hurt the Ukrainian. The two fighters finally let their hands go in the eighth round to trade power shots.

The last time Derevyanchenko was in the ring he was stifled by Daniel Jacobs for the vacant IBF title. Derevyanchenko suffered his first career loss and knockdown in the split decision against Jacobs last year in New York.

With Saturday’s win, Derevyanchenko is now in line to receive a second title shot, but it might not be against the man who defeated him. Jacobs is scheduled to face Saul “Canelo” Alvarez on May 4 in a unification bout at T-Mobile Arena in Las Vegas.

Derevyanchenko, a 33-year-old from Ukraine, was once viewed as a fighter no middleweight champion wanted to face. That notion went out the window after his disappointing performance against Jacobs, a tough matchup to begin with because the two had spared hundreds of rounds before and shared the same trainer.

Against a different foe, Derevyanchenko proved that he at least belongs in the conversation to face the best boxers in the 160-pound division.

"I'm happy to be here for this world title elimination fight,” Derevyanchenko said earlier this week. “This fight is important for my career to get back to where I want to go and to show what I am capable of.”

As for Culcay, he came up short again versus a notable opponent. The 33-year-old German has losses to Maciej Sulecki and Demetrius Andrade, the WBO champion.

"It's nice to be here and I'm very thankful for this opportunity against Derevyanchenko,” Culcay said earlier this week. “It's a great honor for me to be in this fight against one of the best middleweights in the world. This the step that I was looking to take in my career.”

[QUOTE=Bjl12;19659134]Jacobs schooled Dervenchenko? A Split Decision where fans had it 6-6? KD in 1st won it..[/QUOTE] You have to be very generous to Sergei D to give him 6 rounds of that fight. [QUOTE] And you're suggesting Vanes was a…

[QUOTE=pillowfists98;19659182]GGG fans are thrilled that Derevyachenko didn't look great last night because to them it somehow excuses GGG ducking him.[/QUOTE] Culcay put hands on that boy!!! I see nothing special about Derevy...

Culcay should demand a Re-Match!!!! Fight was a draw on my book...

GGG fans are thrilled that Derevyachenko didn't look great last night because to them it somehow excuses GGG ducking him.

[QUOTE=yankees7448;19658146]Nonsense. No one ever worried about Sergei d and they would worry even less after his last two fights. He just got passed over for a better opportunity. Sergei d could have fought the winner of Canelo vs GGG in…