The proposed middleweight title eliminator between Sergiy Derevyanchenko and Jack Culcay might not head to Germany after all.

The lone other bidder during Tuesday’s session was AGON Sports, Culcay’s promoter who talked a good game beforehand of bringing the bout to Germany. However, the Berlin-based outfit left the fate of its fighter in the hands of the enemy after falling well short with its $397,713 offering. 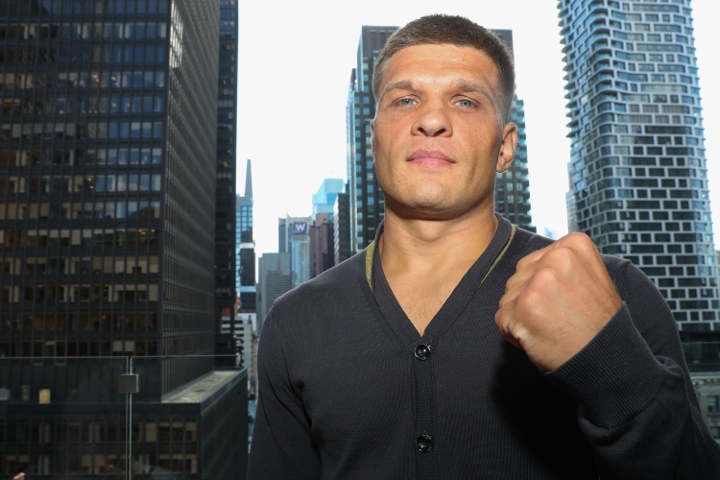 Assuming both parties sign off, the middleweight clash is tentatively due to take place in early spring somewhere in the U.S. The winner will become the mandatory challenger to current titlist Daniel Jacobs, who won the vacant crown in a 12-round split decision win over Derevyanchenko—his training stablemate—last October at Hulu Theatre in New York City.

The vacant title fight left the first two contender slots open in the 160-pound division, a traditional practice by the IBF who will not rank a number-one contender through any other means than resolution from a final elimination bout.

Culcay (25-3, 13KOs)—who represented Germany in the 2008 Olympics—became the highest rated contender to such a bout on the heels of three straight victories at middleweight following back-to-back losses in the super welterweight division.  His most recent win came last September, a 10th round knockout of Rafael Bejeran in an IBF regional title fight which was taken with the intention of next fighting in a title eliminator.

In making the happen, a promise was kept by AGON Sports, which was formed in October 2017 and added Culcay as one of its first boxing clients last February. The entirety of Culcay’s three-fight win streak has come while fighting under the AGON banner.

Derevyanchenko (12-1, 10KOs) has not fought since the aforementioned loss to Jacobs. A member of the 2008 Ukraine Olympic team, the squat middleweight relocated to Brooklyn prior to the start of his pro career, where he shares a head trainer with Jacobs in noted New York City coach Andre Rozier.

An aggressive push to the title stage led him to an Aug. ’17 final eliminator with Tureano Johnson, whom Derevyanchenko handled en route to a 12th round knockout to become the mandatory contender to then-champ Gennady Golovkin.

A stay-busy win over Dashon Johnson last March came about only because of Golovkin’s plans changing in the wake of a planned voluntary defense—a rematch with Saul ‘Canelo’ Alvarez—stalled after the Mexican tested positive for clenbuterol.

The IBF granted Golovkin a replacement for the voluntary defense, with the condition that he next face Derevyanchenko who was permitted an interim bout for the sake of remaining active. Golovkin went on to crush miserably overmatched Vanes Martirosyan in two rounds but vacated his IBF title in favor of a Sept. rematch with Alvarez, losing the fight and all of his remaining titles.

The final eliminator between Culcay and Derevyanchenko was initially ordered by the IBF on December 8. Culcay’s side was apparently a bit too overconfident in believing they could secure the rights to the event, as negotiations never really got off the ground and the two sides forced to wait out the January 15 purse bid hearing as a result.

A win of sorts for Culcay comes in the final purse split.

Thanks a new rule instituted by the IBF, the higher-rated challenger for any sanctioned eliminator is entitled to the favorable end of a 65/35 purse split. Culcay is the IBF’s #2 contender, one spot ahead of Derevyanchenko.

Smart by Derevyanchenko, to get offered an eliminator and getting back in the mix is great. Don't know if I want to see the rematch with Jacobs so soon but the IBF will force it later this year if he…

Derevyanchanco vs Charlo, he's no Willy Monroe, he'll push Charlo to edge. Derevyanchanco would be a 50/50 against GGG, Canelo and Sulijic. I don't want to see him fight Jacobs or Andrade, they both have a similar style and a…

He just fought for the IBF title....What?