The hard-hitting Ukrainian middleweight contender brutalized Johnson with an array of power punches to the head and body. Derevyanchenko stopped the veteran following six one-sided rounds Saturday night at Barclays Center in Brooklyn.

Derevyanchenko improved to 12-0 and recorded his 10th knockout in a scheduled eight-rounder on the non-televised portion of the Deontay Wilder-Luis Ortiz undercard. 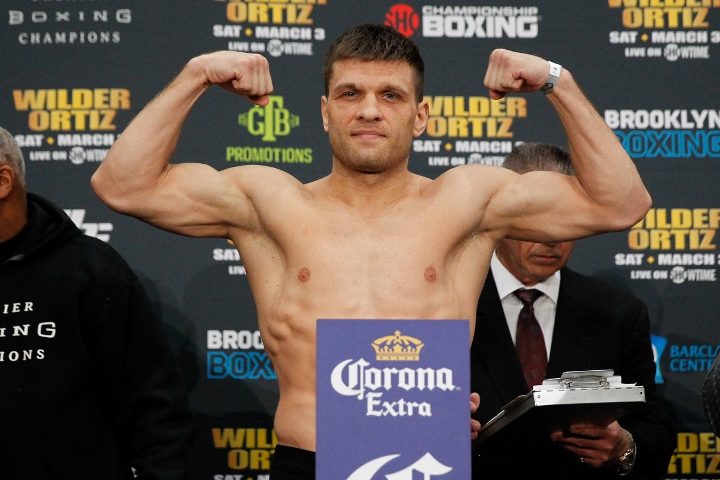 Johnson, of Escondido, California, fell to 22-23-7 (7 KOs, 1 NC). He lost by knockout or technical knockout for just the third time in his 10-year pro career.

There were no knockdowns during the bout, but Derevyanchenko was in complete control from beginning to end.

“Every time he came in and punched, his body was open,” Derevyanchenko said. “That gave me opportunities to go for the knockout.”

Derevyanchenko was supposed to box Johnson on the Errol Spence Jr.-Lamont Peterson undercard January 20 at Barclays Center. Once Derevyanchenko got sick the week before their fight, it was postponed until Saturday night.

The 32-year-old Derevyanchenko fought for the first time since he stopped the Bahamas’ Tureano Johnson (20-2, 14 KOs) in the 12th round of their IBF elimination match August 25 in Miami, Oklahoma. That made Derevyanchenko the IBF’s mandatory challenger for its middleweight champion, Gennady Golovkin (37-0-1, 33 KOs).

While Derevyanchenko wants to test himself against Golovkin, he is growing impatient while waiting for that title shot. Kazakhstan’s Golovkin will meet Mexico’s Canelo Alvarez (49-1-2, 34 KOs) in a much-anticipated rematch May 5 at T-Mobile Arena in Las Vegas.

[QUOTE=kushking;18540521]This dudes a bum. Hed get owned by any of the top 5 at mw.[/QUOTE] Apparently someone forgot that Sergiy damn near beat Golovkin not too long ago.

I missed this article. I mean here's a PBC guy, Derevy, who can't even get fellow PBC fighter Charlo for his dancing parter in the house. No crossing the street, no Hearn to deal with, yet fight is still not…

[QUOTE=Shrap;18539151]Why did he fight such a no hoper opponent? A mismatch like that shouldn't even be sanctioned.[/QUOTE] This dudes a bum. Hed get owned by any of the top 5 at mw.

Middleweight is STACKED!!! I remember when it was dog sht! Tureno, Heiland, Blanco, The midget as 1's. Now we got. Andrade Canelo Charlo Sirgiy GGG Jacobs Murata Hell the other Charlo and Spence could make 160 easily.

[QUOTE=Shrap;18539151]Why did he fight such a no hoper opponent? A mismatch like that shouldn't even be sanctioned.[/QUOTE] Stay-busy fight because he feels being mandatory?