Will the Robert Helenius vs Dereck Chisora rematch, scheduled for May 27 at the Hartwall Arena in Helsinki, be postponed?

Well, the rumor is out and according to Finnish sources it comes from England and took even Robert Helenius by surprise.

The Nordic Nightmare said he will continue to train and end sparring on Saturday. Among the sparring partners is EBU champ Agit Kabayel. There has been no comment from Team Sauerland, the show´s promoter, on the matter. 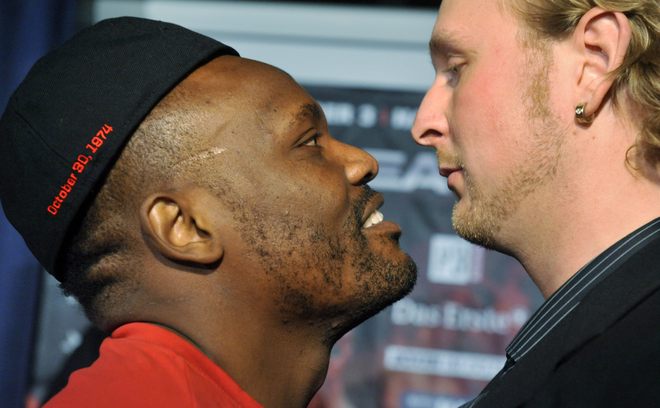 German heavyweight Francesco Pianeta (31-2-1) returns to action on June 17 in Tranreut after almost 18 months out and is now promoted by Petko´s Box Promotion.

Pianeta was stopped in one by then WBA king Ruslan Chagaev and also lost to Wladimir Klitschko. Headlining the Tranreut bill is former Olympian and local hero Serge Michel (2-0).
...

As previously reported, WBA super middleweight champ Tyron Zeuge (20-0-1) follows the tracks of his older and more famous stablemate Arthur Abraham and defends the title June 17 in Wetzlar and the opponent is Paul Smith (38-6), well known to German fans after his two good fights against  Abraham, then the WBO titlist.

In 2006 Abraham defended the title in Wetzlar in what was a bloody slugfest with the champion fighting with a broken, bleeding jaw and opponent Edison Miranda had a total of five points deducted. Abraham was somehow allowed to continue by the ringside physician but looked like he wanted to quit and Miranda was too eager to finish it and Abraham lasted the distance - and with five points deducted Miranda lost the fight. It was an incredible fight. No one I spoke with afterwards had seen anything like it.

Amazingly Abraham came back and looked as strong as ever and knocked out Miranda in the rematch in the United States in 2008.

What now? Another good HW getting postponed or cancelled? I hope not as I was looking forward to this fight. Good to see Pianeta back in action. He's a decent Euro-level fighter...

WTF. So a rumor that the fight will be postponed but no reason why? I certainly hope not, am really looking forward to this fight. Good to see Pianeta returning, he's a good test for up and coming Euro prospects.…