Dereck Chisora has his new opponent for October 26.

Promoter Eddie Hearn announced Tuesday that the London-based heavyweight contender will box British veteran David Price in a 12-round fight that night at O2 Arena in London. Chisora was supposed to face former WBO champion Joseph Parker, but New Zealand’s Parker withdrew from their fight last week due to an illness doctors believe was caused by a spider bite.

Chisora-Price will be the co-featured fight on a card that’ll be headlined by 140-pound champions Regis Prograis and Josh Taylor. New Orleans’ Prograis (24-0, 20 KOs) and Scotland’s Taylor (15-0, 12 KOs) will fight for Prograis’ WBA championship and Taylor’s IBF belt in the final of the World Boxing Super Series’ 140-pound tournament. 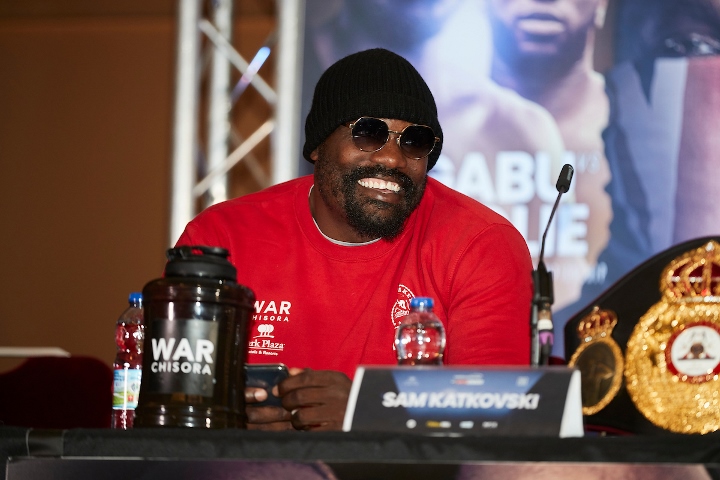 “It didn’t matter who got in the ring with me on October 26,” Chisora said. “I’m ready for war! Parker b*tched out. It’s like he thinks he is Peter Parker, not Joseph Parker, with his Spider Man excuses. It’s cool. Let him do his thing.

“David Price has stepped up and I’m ready for whatever he brings. If he thinks I’m just going to stand there and be a punch bag, like David Allen, he is in for a shock. This is north versus south, and in my hometown, I write the rules. Saturday, October 26, get ready to scream, timber!”

The Zimbabwe-born Chisora has long resided in London. Price hails from Liverpool.

Their fight will feature two of British boxing’s best-known heavyweights.

The 36-year-old Price (25-6, 20 KOs) has won three fights in a row since Sergey Kuzmin (15-1, 11 KOs, 1 NC) stopped him following the fourth round of their September 2018 bout at Wembley Stadium in London. In his last appearance, Price defeated domestic rival David Allen (17-5-2, 14 KOs) by technical knockout following the 10th round of their scheduled 12-rounder July 20 at O2 Arena.

“I’m very excited for this fight,” Price said. “I kept in the gym all summer because I had a feeling I had to be ready for a call like this, and ready I am.”

The Chisora-Price and Prograis-Taylor fights will be streamed live by DAZN in the United States. Sky Sports Box Office will offer those bouts on pay-per-view in the United Kingdom (£19.95).

[QUOTE=Kcvtr81;20115782]With a chin made of butter like David Price has he doesn’t even have to hit him just the breeze off the glove will buckle him[/QUOTE] His chin isn’t that bad... it’s more a stamina problem with Price. He’s definitely…

I think this fight could throw up a few surprises. I favor Chisora - like most here, he will likely walk Price down and land something on that glass jaw before the 6th Round but... In an early exchange Price…

Weird fight because Dereck and David are friends. But yeah Chisora will walk him down and take him out mid-rounds.

[QUOTE=RJJ-94-02=GOAT;20113911]I do think Chisora wins, I just don’t concur that he’s a huge puncher that’s gonna blow Price away early. The Takam stoppage kinda sums up my point, he broke him down then dropped and stopped him. He’ll pressure Price…