Deontay Wilder vs. Tyson Fury To Be Carried in Movie Theaters

WBC Heavyweight World Champion Deontay Wilder (40–0, 39 KOs) will defend his title against lineal champion Tyson Fury (27-0, 19 KOs) in a blockbuster matchup on Saturday, December 1. Boxing fans will want to catch all the action, larger-than-life on the big screen, at their local cinemas as these undefeated warriors battle it out LIVE from STAPLES Center in Los Angeles.

Tickets for “Wilder vs Fury” can be purchased online by visiting www.FathomEvents.com or at participating theater box offices.

The live broadcast of “Wilder vs Fury,” presented by SHOWTIME PPV and Fathom Events, is set for Saturday, December 1 at 9 p.m. ET/ 8 p.m. CT/ 7 p.m. MT/ 6 p.m. PT/ 5 p.m. AK/ 4 p.m. HI. Fans throughout the U.S. will be able to enjoy the event in more than 400 select movie theaters through Fathom’s Digital Broadcast Network (DBN). A complete list of theater locations is available on the Fathom Events website (theaters and participants are subject to change). 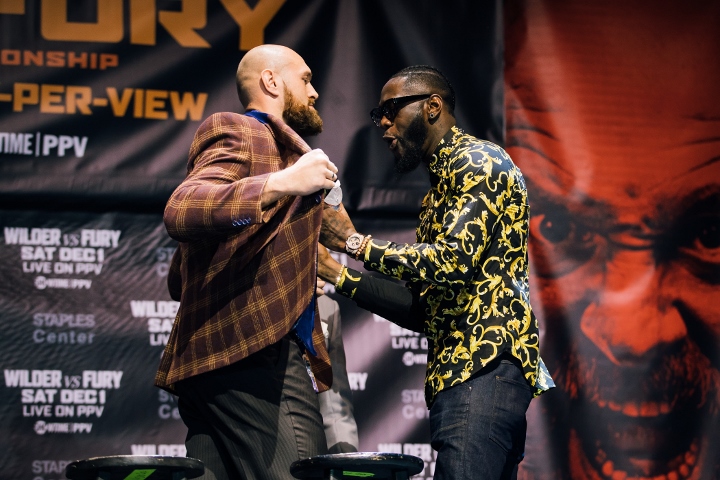 “Wilder vs Fury” tests the raw power of Wilder against the unmatched size and mobility of Fury. America’s only heavyweight champion since 2007, former Olympian Wilder has won by knockout in all seven of his WBC title defenses. Fury, the “Gypsy King,” is a former IBF, WBA and WBO heavyweight world champion who currently holds boxing’s coveted lineal heavyweight title.

The evenly matched showdown of top-ranked heavyweights pits boxing’s two largest champions against each other in the most significant heavyweight fight in the United States since Lennox Lewis vs. Mike Tyson in 2002. In addition to physical stature – Wilder is 6-foot-7, Fury 6-foot-9 – both are among boxing’s greatest showmen, with outsized personalities and heavyweight charisma.

“The fight world has been waiting for an epic heavyweight battle like this for more than 10 years,” said Ray Nutt, Fathom Events CEO. “We are proud to partner with Showtime to give fight fans the opportunity to view, right from their local cinemas, what is certain to be an awesome spectacle.”

To see anyone named Fury fight? This event could barely move people out of their chairs to turn the television on. Now they actually think people are going to pay to be inconvenienced by going through what people went through…

[QUOTE=MisanthropicNY;19275166]Glad this fight is in the theaters, this way I can actually confront Wilder fan boys who start talking smack or acting up, and they can't hide behind a fking screen and keyboard this time.[/QUOTE] Surely its no one here…

[QUOTE=Pigeons;19274927]Man, Finkel doesn't determine how much bars charge. Cable/satellite companies charge the bars and the bars themselves set the cover. Some places like Dave & Buster's and Buffalo Wild Wings (UFC) don't even charge a cover.[/QUOTE] Dave and busters are…

Yea if they would mention Chavez, angulo, Arroela, and Guerrero are on the card it would be sold out. We mexican over here nobody in la cares about the brits they are promoting on the card