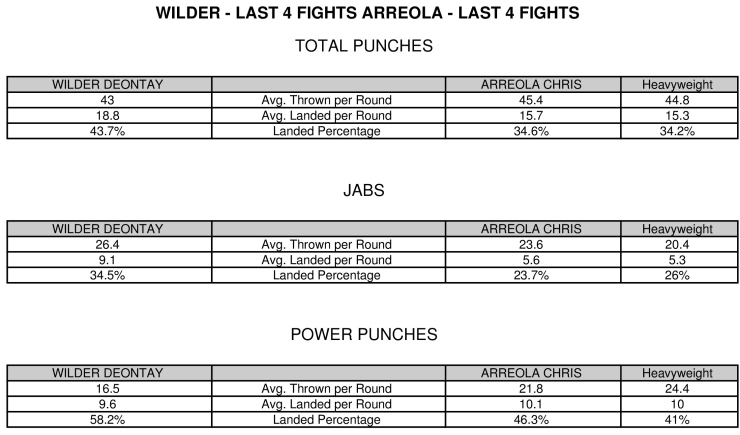 Until about five years ago, Deontay Wilder (36-0, 35 KOs) would have been custom-made for Chris Arreola (36-4-1, 31 KOs). But at this juncture in their respective careers, the opposite is the case.

In his prime, the rough-and-tumble, concrete-chinned Arreola had a crowd-pleasing knack for walking down slicker, sharper fighters like Wilder, taking their best shots and steamrolling them with wrecking-ball hooks and haymakers. But Arreola's punch resistance is not what it used to be and his reaction time has eroded with age.

Arreola, 35, has been reduced to a plodder, half a step too slow on his feet and a split second too slow on the trigger, which will make him easy pickings for Wilder, who is at or near the peak of his abilities. Arreola's defense, even in his heyday, had more holes than Swiss cheese, and Wilder as his 97 percent knockout rate suggests, can crack with clinical precision from both fists.

But Wilder's own defense is far from perfect. Despite his impressive height and reach, Wilder, 30, has proven alarmingly easy to hit. In his three title defenses, he has allowed crude brawlers to effortlessly penetrate his guard and rock him with clean solid punches. In all three bouts, he was able to get in the knockout punch before his challengers, but they were all B to B-minus caliber opponents at best.

Although Wilder enters the ring an overwhelming favorite, Arreola remains a live underdog for two reasons - his experience and punching power. Eric Molina, a lamer, tamer version of Arreola in his prime, was able to quite casually close the distance and wobble Wilder but lacked the wherewithal and skill set to close the show. Closing the show is, or at least once was, Arreola's forte.

It is all but inconceivable that Arreola can turn back time and recapture his relentless pressure-fighting self for the full 12 rounds. But given Wilder's defensive lapses, Arreola might only need to rekindle that uncompromising form at the right, opportune moment to pull off an upset.

The question is, will Wilder be cavalier and over-cocky enough to allow the older, slower man do that?

Tha 'Bronze Bomber' Breaking Record With One BROKEN Hand! but he a bum doe! hahahahaha! BOMBSQUAD!

The only shots that count are the last ones and that's the ones at the bar that the winner downs and Arreola is a BIG drinker. :firedevil

Sucks major donkey di*k. I'm stuck at work and the cables out. I have to use all my data on my phone and watch some shytty stream, and the announcers are French, so I can't even listen to the dam…