Deontay Wilder will visit one of the most acclaimed champions in heavyweight history before training camp for his third fight versus Tyson Fury.

Wilder disclosed during the newest episode of “The PBC Podcast” that he’ll meet in person with George Foreman to get some advice on how to defeat Fury, who won their heavyweight championship rematch by seventh-round technical knockout. Foreman and Wilder had “a great conversation” recently, according to what Wilder told co-hosts Kenneth Bouhairie and Mike Rosenthal.

“It was good talking to George,” Wilder said. “You know, George is one of the guys that been trying to get in touch for a good little bit. But, you know, you be moving so much, and everybody have a schedule and stuff. But, you know, during this time, you know, everything is shut down. You know, so it’s always good to have great conversations at this moment in time.

“And, you know, we had a great conversation. You know, it was a real, real good conversation. We talked about a lot of things that went on in his career, you know, good and bad. A lot of, you know, different tricks of [the] trade that used to happen, and certain things that he saw in this fight, and a lot of knowledge that he applied to me.” 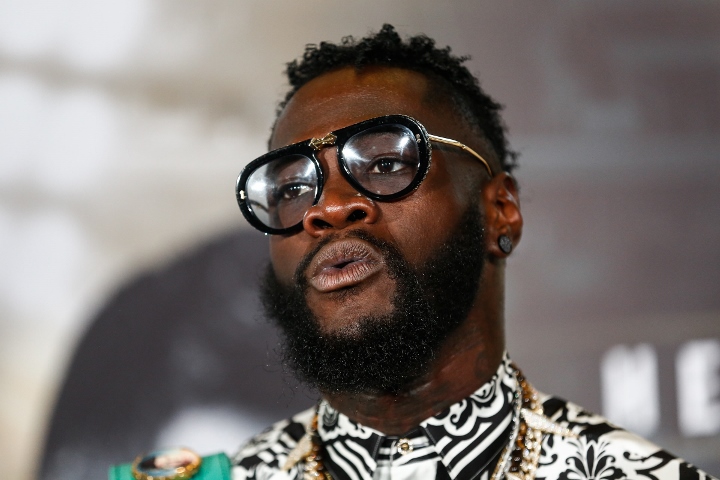 Wilder wants to add two people to a training team led by Jay Deas, who has worked with Wilder throughout his amateur and pro career. The former WBC heavyweight champion didn’t say if Foreman would be one of those two additions.

The Tuscaloosa, Alabama, native nevertheless is looking forward to learning some things from Foreman, who became the oldest champion in the history of the heavyweight division when, at the age of 45, he knocked out Michael Moorer in November 1994 in Las Vegas to win the IBF and WBA titles.

“He was telling me how he wanted to show me some methods of strengthening certain parts of my body, and stuff like that,” Wilder said. “But he definitely dropped a couple of gems down for me, you know, and it was good to [speak to] him. I think I’m gonna, once everything clears up or whatever, I’m gonna go out and go see George, see him face to face, spend some time with him, and intake some of that good, ole’ knowledge that he have up there.”

The 34-year-old Wilder (42-1-1, 41 KOs) and the 31-year-old Fury (30-0-1, 21 KOs) are expected to meet a third time October 3 at a venue to be determined. Fury floored Wilder twice, once apiece in the third and fifth rounds, before their one-sided rematch was stopped in the seventh round February 22 at MGM Grand Garden Arena in Las Vegas.

Big George can only motivate wilder to hang on when wilder is ready to quit. But his corner will throw in the towel again.

Foreman just sold wilder a lemon. Hook, line and sinker. Foreman is a good used car salesman but maybe he's got some good insight for wilder that he can apply. Also, anyone recognize that wilder says "you know" a lot?…

Wilder doesn't have the discipline to learn, he's just saying this stuff so people think he is going to actually work on stuff this time he isn't

[QUOTE=MisanthropicNY;20520262]Wilder is definitely the World Heavyweight Champion of race-baiting. I can't argue with that.[/QUOTE] He is weak, just like his fanbase. Bunch of 80 IQ mouth breathers.

[QUOTE=denium;20519872]Holmes is a Fury fan.[/QUOTE] Holmes is about his money too, everyone knows that. Maybe he asked for too much and Foreman wants less, LOL!!!!