Deontay Wilder: This is Personal, I Want To Destroy Breazeale

Undefeated WBC Heavyweight Champion Deontay "The Bronze Bomber" Wilder will put his title on the line for the ninth time when he steps into the ring against hard-hitting mandatory challenger Dominic "Trouble" Breazeale live on SHOWTIME and presented by Premier Boxing Champions on Saturday, May 18 from Barclays Center, the home of BROOKLYN BOXING™.

Wilder vs. Breazeale promises the type of explosive displays of power that fans have come to expect from the red-hot heavyweight division as the two knockout artists have combined for 57 knockouts in 62 professional bouts. Both men stand at 6-foot-7-inches tall, have engaged in numerous dramatic clashes and are fan-favorites at Barclays Center. Wilder will be fighting at the arena for the fourth time and Breazeale will be making his third appearance. 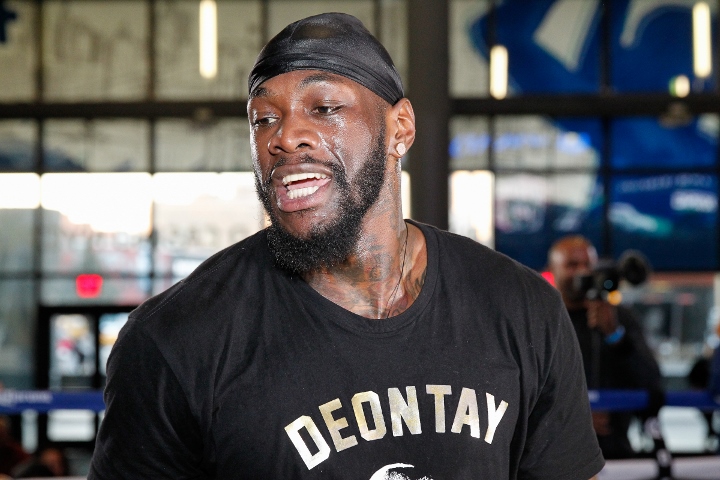 Wilder (40-0-1, 39 KOs) is the most exciting heavyweight in the world with a power-punching style that has fans on the edge of their seats from start to finish, knowing the tide of a fight can change in the blink of an eye. He has only gone the distance twice in his career with 39 of his 41 matches ending inside of the distance. He battered Bermane Stiverne over 12 rounds to win a lopsided unanimous decision and claim the WBC title on Jan. 17, 2015. In the rematch two years later Wilder crushed Stiverne with a brutal first-round knockout that left the challenger crumpled on the bottom rope.

The 33-year-old Wilder is coming off a thrilling battle with British heavyweight contender Tyson Fury that resulted in a split draw on Dec. 1. Wilder scored knockdowns in the ninth and 12th rounds of the fight. The last knockdown appeared to finish off Fury, but he beat the referee's count and made it to the final bell.

Born in and still living in Tuscaloosa, Alabama, Wilder picked up the nickname "The Bronze Bomber'' in honor of Joe Louis, who was known as "The Brown Bomber'' after he won the bronze medal as a member of the 2008 U.S. Olympic boxing team. Wilder got a late start as a boxer, taking up the sport at age 20 hoping to become a professional and earn enough money for the medical treatments of his daughter Naieya, who was born with spina bifida. He won the U.S. Olympic trials with just 21 amateur bouts under his belt.

"I'm very happy that I get a chance to get a mandatory out of the way, because I consider mandatories like flies buzzing around my head," said Wilder.

"They bother me. I'm busy. I have things that I want to do. I want to get him out of the way. I'm about to smash this fly. This is a personal fight for me. As the universe works this is the perfect time. I haven't been this excited about destroying an opponent since Bermane Stiverne. I'm also excited to have the very first event for BombZquad Promotions at what I consider one of best arenas in the country, Barclays Center in Brooklyn. It's go time baby. I can't wait.''

[QUOTE=jglvz256;19599294]Clever attempt at reverse psychology but it's not going to stop people talking about this I'm afraid. :)[/QUOTE] Its an alt account, best just to ignore.

[QUOTE=MastaBlasta;19601208]Remind AJ of that.[/QUOTE] AJ has told Hearn that he is concentrating on training camp for Miller. AJ is a pro. No stone unturned. Miller is a decent HW, but he is no match for AJ. Whyte found this out,…

[QUOTE=MastaBlasta;19601246]So if the fight is gonna go to the highest bidder, and DAZN already had Wilder locked into that 3 fight $100 mil thing, effectively Showtime/PBC had somewhat a ceiling on their potential bid, since they get a percentage of…

So if the fight is gonna go to the highest bidder, and DAZN already had Wilder locked into that 3 fight $100 mil thing, effectively Showtime/PBC had somewhat a ceiling on their potential bid, since they get a percentage of…