LAS VEGAS – Deontay Wilder was heavier Friday afternoon than he was the first time he fought Luis Ortiz.

The Cuban-born Ortiz, meanwhile, was lighter than he was for their first fight for their 12-round rematch Saturday night at MGM Grand Garden Arena.

The 34-year-old Wilder weighed 219½ pounds when he stepped on the Nevada State Athletic Commission’s scale, almost five pounds more than the 214¾ pounds he officially weighed for their first fight. The 40-year-old Ortiz officially came in at 236½ pounds Friday, nearly five pounds less than the 241¼ pounds he was when he weighed in for their initial encounter. 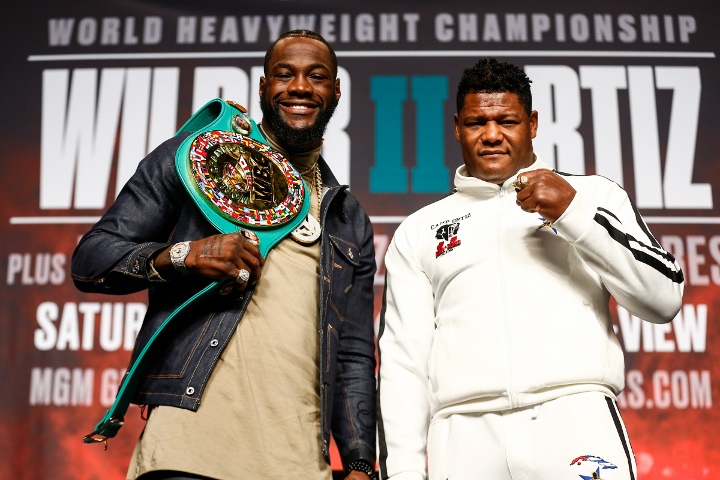 Wilder (41-0-1, 40 KOs), of Tuscaloosa, Alabama, will make the 10th defense of the WBC title he won by beating Bermane Stiverne by unanimous decision in January 2015 at MGM Grand Garden Arena.

Among those defenses was a 10th-round stoppage of Ortiz (31-1, 26 KOs, 2 NC) in March 2018 at Barclays Center in Brooklyn. Ortiz hurt Wilder toward the end of the seventh round in that bout, but Wilder withstood Ortiz’s onslaught, recovered in the eighth and ninth rounds and dropped Ortiz twice more in the 10th round, before referee David Fields stopped their scheduled 12-rounder.

Before Wilder and Ortiz weighed in, only four of the six fighters who’ll be part of FOX Sports’ four-fight, pay-per-view telecast met their contractual obligations.

Santa Cruz, 31, and Flores, 27, will fight for the WBA’s “super” 130-pound championship. Gervonta Davis vacated that title to move up to the lightweight division.

Moments earlier, 22-year-old Brandon Figueroa (20-0, 15 KOs), of Weslaco, Texas, officially weighed 122 pounds for his WBA super bantamweight title defense against Julio Ceja (32-4, 28 KOs). Mexico’s Ceja, 27, was absurdly overweight, as he weighed in at 126½ pounds for what was supposed to be a 12-round, 122-pound championship match.

Figueroa is expected to move forward with their bout, but Figueroa’s title won’t be at stake for Ceja.

Prior to Ceja’s failure at the scale, Luis Nery didn’t make weight for his fight against Emmanuel Rodriguez, a 12-round WBC bantamweight elimination match.

Nery (30-0, 24 KOs), of Tijuana, Mexico, weighed 119 pounds, one pound over the division’s limit. The 24-year-old former WBC bantamweight champ was granted an hour to come back to the NSAC’s scale at 118 pounds or lower.

[QUOTE=Legends456;20204494]Interesting point, please explain why you think strong lats will be an advantage in this matchup?[/QUOTE] It’s going to be advantageous for Ortiz to have snappier punches thanks to his strengthened back muscles. He’ll need that extra bit of speed…

[QUOTE=Bundt;20204269]I’m hoping for an Ortiz KO inside of 6 with his developed lats. That should make the HW division even more interesting.[/QUOTE] Interesting point, please explain why you think strong lats will be an advantage in this matchup?

[QUOTE=Superbee;20204275]Upset coming... Grandpa looks in great shape... Ortiz TKO round 6 after making Wilder look like a Junior for 5 rounds ... :boxing:[/QUOTE] I keep saying it, folks are sleepin on Ortiz big time....he was beating wilder last time and…

Upset coming... Grandpa looks in great shape... Ortiz TKO round 6 after making Wilder look like a Junior for 5 rounds ... :boxing: