NEW YORK – Deontay Wilder silenced and armed his critics all at the same time Saturday night.

The hard-hitting heavyweight champion came back from severe trouble in the seventh round to knock out Luis Ortiz in the 10th round of their entertaining slugfest before a crowd of 14,069 at Barclays Center in Brooklyn. Ortiz hurt Wilder badly and nearly knocked him out in the seventh round, only to have an incredibly resilient Wilder hurt the Cuban contender late in the ninth and finish off Ortiz in the 10th round.

Wilder buzzed Ortiz with a right hand early in the 10th round, but he shoved Ortiz into the ropes and down with 1:57 to go in it. Ortiz got up from what was rightly ruled a push, but Wilder landed a right-left combination that knocked Ortiz to the canvas for the second time in the fight, at the 1:25 mark of the 10th.

A courageous Ortiz got back up again, but the rejuvenated Wilder wildly attacked him again and connected with two more overhand rights. Then Wilder blasted Ortiz with a right uppercut that dropped him for the second time in the 10th round and third time in the fight.

Referee David Fields stopped the fight at 2:05 of the 10th round, as soon as Ortiz went down to his knees and gloves from that devastating shot.

“A true champion always finds a way to come back and that’s what I did tonight,” said Wilder, who first floored Ortiz during the fifth round. “Luis Ortiz is definitely a crafty guy. He put up a great fight. We knew we had to wear him down. I showed everyone I can take a punch.”

Wilder was well aware, however, that he had just survived by far the toughest fight of his career.

“When he leaves tonight Ortiz can hold his head high,” Wilder said. “He gave the fans a hell of a fight. … Luis Ortiz was one of those fighters that everyone ducked. Even champions ducked him. I wondered why it took so long for him to get a title shot and now we know.”

All three judges – Glenn Feldman, Kevin Morgan and Carlos Ortiz – had Wilder ahead by the same score, 85-84, when the 10th round started.

Wilder (40-0, 39 KOs) made the seventh defense of the WBC heavyweight title he won by out-pointing Bermane Stiverne in January 2015. The 2008 Olympian also kept himself in line for an eight-figure payday against British superstar Anthony Joshua (20-0, 20 KOs), the IBF/IBO/WBA champion. 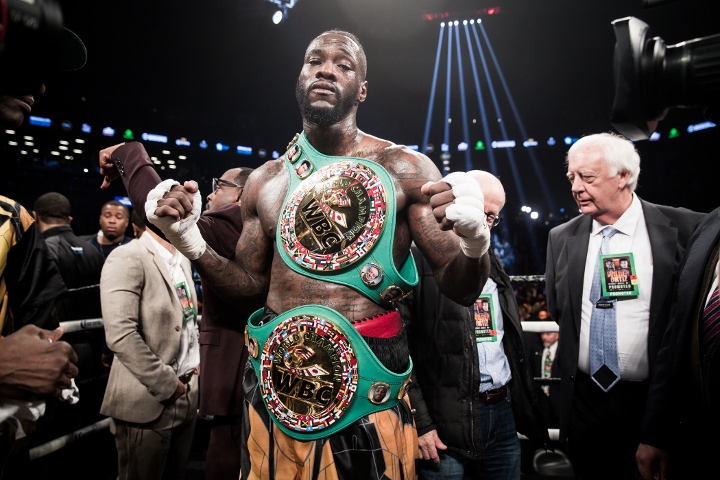 Miami’s Ortiz, though 38 and rumored to be older, still was considered to be the most dangerous opponent of Wilder’s nine-year pro career. While Wilder had won 38 of his first 39 bouts by knockout, he has consistently drawn criticism for facing inferior competition.

After Saturday night, not even his harshest critics can claim Wilder hasn’t withstood a serious test.

“I almost had him and I think I would’ve [stopped him] if there were a few more seconds in the [seventh] round,” Ortiz said. “I thought I was going to get a rhythm earlier. I thought I was winning the fight. This is heavyweight boxing and he caught me with a great shot. He’s a great champion.”

Wilder appeared to be exhausted before he buzzed Ortiz with an overhand right that landed to the side of Ortiz’s head near the end of the ninth round. Ortiz stumbled after absorbing that punch, but the ninth round ended several seconds later.

A tired Wilder was able to move his way through the eighth round following a seventh round in which Ortiz badly hurt him. Ortiz, perhaps fatigued from throwing so many punches in the seventh round, went after Wilder very early in the eighth, but didn’t do much for the rest of the eighth.

Wilder drilled Ortiz with a right hand early in the seventh, but a resolute Ortiz cracked an overanxious Wilder with a right hook, a straight left and another right hook that wobbled Wilder with 39 seconds to go in that round. Ortiz pounced on his hurt opponent and landed several power punches that left Wilder on the verge of getting knocked out.

Ortiz hit Wilder with a stinging straight left hand that knocked Wilder back into the ropes with 10 seconds left in the seventh. Ortiz tried as hard as he could to finish Wilder, but Wilder was able to hold and move his way to the end of the seventh round.

If Ortiz had more time, even just several additional seconds, he might’ve finished Wilder in the seventh. An exhausted Wilder moved slowly back to his corner, but shook his head, as if to indicate he wasn’t finished just yet.

“Wilder was definitely saved by the bell,” Ortiz said. “I thought I had him out on his feet. But you have to give him credit, he weathered the storm.”

Each of the three judges scored the seventh round 10-8 for Ortiz, even though Wilder didn’t go down.

After flooring Ortiz late in the fifth round, Wilder was much more aggressive to start the sixth round than he had been earlier in the fight. Wilder caught Ortiz with a straight right hand early in the sixth, but Ortiz threw bombs back in Wilder’s direction to slow his aggressive opponent’s attack.

Ortiz ended a lull in the action by throwing a combination at Wilder late in the sixth. Neither fighter appeared to land a significant shot during that wild exchange.

Wilder threw a right-handed haymaker early in the fifth round, but he missed Ortiz badly near the ropes. Later in the fifth, Ortiz hit Wilder with a left hand that landed when Wilder was backed into Ortiz’s corner.

That shot seemed to awaken Wilder, who knocked down Ortiz soon thereafter. Wilder wobbled Ortiz with a right hand directly to the middle of Ortiz’s face and then dropped him with another right hand.

Ortiz reached his feet quickly and the round ended before Wilder could capitalize on hurting his opponent.

Wilder connected with a straight right hand that made Ortiz move backward early in the fourth round. Ortiz connected with left to Wilder’s left shoulder that knocked Wilder off balance around the midway point of the fourth.

Fields warned Wilder for shoving Ortiz to get out of a neutral corner late in the fourth.

Ortiz did his best to back up Wilder during the third round. The aggressor didn’t land much in that round, but Wilder spent most of those three minutes moving away from Ortiz.

Wilder began using his jab early in the second round. Ortiz fell to the canvas moments later, seemingly after coming in contact with Wilder’s left, but Fields ruled that he slipped.

Wilder seemed to think he hurt Ortiz once his opponent got up. Ortiz fired a hard left hand as soon as Wilder came toward him, though, to make Wilder move away.

Just before the second round ended, Wilder landed a right hand on the top of Ortiz’s head. That punch didn’t seem to land flush and didn’t affect Ortiz.

Wilder was cautious to start the bout and Ortiz took advantage by coming forward barely a minute into the fight. Ortiz didn’t land anything hard during that sequence, but he made Wilder move and reset his feet.

Wilder shook out his arms, before unloading a straight right hand that didn’t quite get there late in the first. Ortiz countered with a left hand that made Wilder retreat.

Nine rounds later, Wilder was able to secure a convincing victory he thought he would earn four months ago.

Wilder and Ortiz were scheduled to fight November 4 at Barclays Center, but Ortiz was removed from the fight late in September. The WBC wouldn’t allow Ortiz to challenge Wilder once he failed a Voluntary Anti-Doping Association test for two banned diuretics.

Wilder still insisted on fighting Ortiz once he stopped Stiverne. The WBC kept Ortiz in its rankings because the Mexico City-based sanctioning organization concluded following an investigation that Ortiz’s positive test stemmed from required blood pressure medication he failed to disclose he was taking on VADA’s pre-test form.