LAS VEGAS – Deontay Wilder was prophetic when he said he only had to be perfect for two seconds.

After six-plus completely imperfect rounds for Wilder, that’s all it took Saturday night for him to knock out Luis Ortiz again. Down on all three scorecards, the hard-hitting heavyweight champion drilled Ortiz with a devastating right hand that abruptly ended their rematch in the seventh round at MGM Grand Garden Arena.

Wilder’s right hand dumped a stunned Ortiz flat on his back, underneath a bottom rope. A disoriented Ortiz tried his best to beat referee Kenny Bayless’ count, but he couldn’t get up in time to continue in the main event of FOX Sports’ Pay-Per-View show.

The 34-year-old Wilder (42-0-1, 41 KOs), who went off as a 4-1 favorite at MGM Grand’s sports book, made the 10th defense of the WBC heavyweight title he won nearly five years ago from Bermane Stiverne, also at MGM Grand Garden Arena. Two of those defenses were made against the 40-year-old Ortiz (31-2, 26 KOs, 2 NC), whom Wilder first stopped in the 10th round of their March 2018 fight at Barclays Center in Brooklyn.

The Alabama-based knockout artist’s victory also solidified his place in a rematch with lineal heavyweight champion Tyson Fury. Wilder and Fury (29-0-1, 20 KOs), who fought to a controversial draw last December 1 at Staples Center in Los Angeles, are tentatively scheduled to fight again February 22 at an undetermined site. 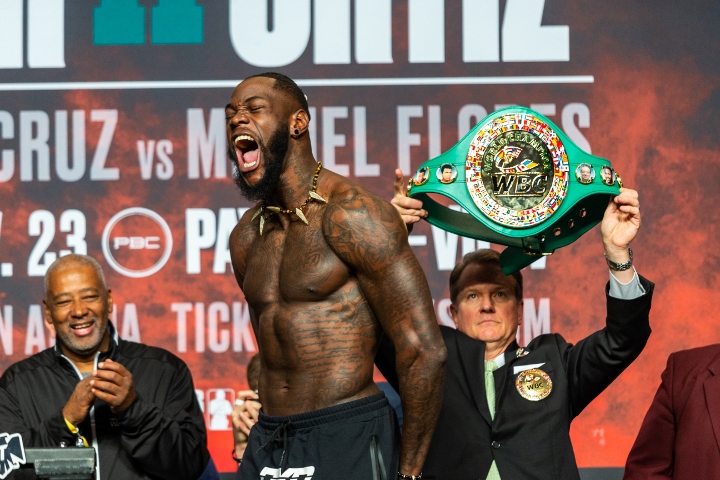 The date of the Wilder-Fury rematch might change, but there now are no known obstacles in the way of it materializing, as they’ve both signed contracts.

“With Ortiz, we can see why no other heavyweight wants to fight him,” Wilder told FOX Sports’ Heidi Androl during his post-fight interview. “He’s very crafty in the ring and his ring intellect is very high up in the ring. So, I had to play around with him. I had to calculate certain moves. … You know, I was in and out. Sometimes, I was backing up on my back feet. Some say I can’t fight on my back feet, but that’s my specialty. I had to go back and I had to go forward. I had to go back and go forward, different tactics.

“You know, my intellect is very high in the ring, even though I don’t get no credit for it. But, you know, I had to go in and I had to go out. I had to throw the right hand a few times and I finally got my measurement, and I took the shot. I seen the shot and I took it. I think I hurt him one time, buzzed him a little bit with the left hook. That was the start of it, and then I took my [cue] from there. But Ortiz is one of the best in the world.”

Ortiz came into their rematch in better condition and nearly five pounds lighter than he was for the first fight. The skillful, powerful southpaw had boxed well before Wilder knocked him out and was building a sizeable lead on the cards.

“This is boxing,” Ortiz said. “I said that one of us was gonna get knocked out and it wasn’t gonna go 12 rounds.”

Ortiz admitted he was frustrated because he boxed so well, only to get knocked out again by Wilder.

“I was clear-headed when I hit the canvas,” Ortiz said. “When I heard the referee say, ‘Seven,’ I was trying to get up. But I guess the count went a little quicker than I thought.”

Wilder and Ortiz each landed left hooks after Wilder missed wildly with a right hand early in the seventh round. Ortiz continued to block Wilder’s right hands for the rest of the seventh round, until Wilder landed the shot that sent an announced crowd in excess of 10,000 into a frenzy.

Wilder tried to fend off Ortiz with his jab in the sixth round. Ortiz out-landed him again, though, and appeared to build upon what was becoming an insurmountable lead.

Ortiz continued to out-land Wilder during the fifth round and blocked most of Wilder’s attempts at landing his thudding right hand.

A left by Ortiz backed Wilder into his own corner early in the fourth round. Wilder shook his head, however, and beat his chest as Ortiz tried to follow up.

Ortiz backed up Wilder with a straight left hand about 45 seconds into the third round. An accidental clash of heads left Ortiz holding his head at about the midway mark of the third round.

Bayless warned Ortiz for a low left hand later in the third round.

Ortiz and Wilder were cautious in the first round, but Ortiz caught Wilder with a left hand that amounted to the best shot of those three minutes. Wilder’s elbow appeared to open the cut near the right side of Ortiz’s hairline in the first round as well.

Wilder definitively defeated Ortiz in their first fight, but Ortiz nearly knocked out the 2008 Olympic bronze medalist that night.

Ortiz hurt Wilder with a left hand toward the end of the seventh round of that bout. Wilder withstood Ortiz’s onslaught, recovered in the eighth and ninth rounds and dropped Ortiz twice more in the 10th round.

Referee David Fields stopped their scheduled 12-rounder when Ortiz was on his gloves and knees. Wilder dropped him that third and final time with a vicious right uppercut.

Wilder previously had floored Ortiz in the fifth round of that bout.

Those troublesome moments in the seventh round made their rematch somewhat saleable, even though Wilder already had signed a contract to face Fury again in another rematch.

[QUOTE=Inspired;20216623]ive been running businesses since i was 18..aswell as paying employee's, im assuming the tax set up for companies is similar in the uk to the US, as it is in most countries. [I]they can pay him a $3M purse,…

[QUOTE=saintpat;20216473]Ironic that you used the word ‘project’ then proceeded to project all of the Matchroom FC party line bullspit on Haymon. Money laundering? LOL. The reason fighters are paid on the side by PBC rather than all as purse money…

[QUOTE=Inspired;20216298]please don't project your strange devotion to al haymon onto me by referring to hearn as my 'god'. please, stop with that ****. no one is my god, probably not even 'The God' is my god these days. I don't…

[QUOTE=saintpat;20214781]Eddie dodges questions but I guess he’s too artful a dodger for you to recognize that. One small instance: Asked if Dillian Whyte has been cleared of any wrongdoing with his PED test, he answers with a question (“would they…