Deontay Wilder: I've Had Seven Surgeries on My Arm

WBC heavyweight champion Deontay Wilder said he couldn’t gain full extension and was hindered from properly targeting lineal champion Tyson Fury with his powerful right hand likely due to damage that occurred in his arm while training for their December 1 draw in which “The Bronze Bomber” scored a pair of knockdowns.

Wilder told Fred Hawthorne of Barbershop Conversations that a sparring session “12 weeks before camp” caused a break in the arm, and told BoxingScene.com the injury necessitated surgery that lasted "about an hour and a half." 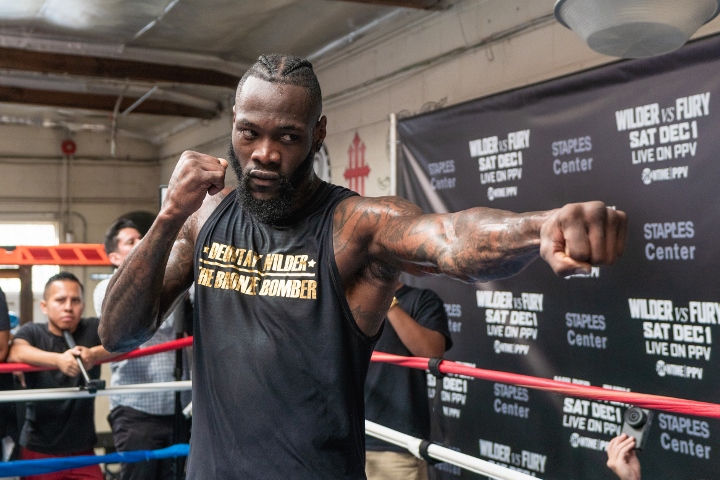 During a Monday, December 10 appearance on The Joe Rogan Experience with UFC announcer and comedian Joe Rogan, Wilder said has endured “seven operations” to repair damage to his right fist, arm and biceps.

“That fight with Fury was crazy. I couldn’t straighten my arm out. It felt like something was stopping me from throwing it straight until right at the end, for some reason. I was very anxious to knock him out, but I couldn’t straighten it out. I kept going back to my corner and they were like, ‘Why can’t you throw the fight hand? It’s right into there,'” said Wilder, a 2008 Olympic bronze medalist from Tuscaloosa, Alabama.

“This dude [Fury] would bend down right here and it seemed like [it was] in slow motion to me. I’ve seen that look many times and I’ve knocked guys out in sparring and in competition because you have your temple exposed, and when you get hit in the temple, it knocks your equilibrium off and your body is not responding [to the mind.] He [Fury] would be right there, and I would still over-loop my punches or I’d telegraph it, and it felt like something was stopping me or something.”

Wilder required separate surgeries to repair a broken right hand and torn biceps in the same arm suffered during a July 2016 eighth-round stoppage of Chris Arreola. The dual surgeries followed a brief procedure on July 21 to help stabilize the hand.

“In the Chris Arreola fight, when broke my hand, and tore my bicep, my team knew I broke my hand, but I didn’t mention that I tore my biceps because I was like, ‘why tell them? I don’t want no one to panic. I’m not worried about it. I’m going to keep throwing it,’” said Wilder to Rogan.

“Chris was so surprised that I did all of these things and that I was still able to throw it. It’s just my mentality when it comes to combat. My mentality overall is that I feel I’m the best. If you’re gonna come and beat me, you’ve gotta come and beat me. It’s not gonna be easy.”

Including the Arreola fight, at that point Wilder had broken his right hand at least three times in seven years, having had metal pins inserted after an injury he suffered in his seventh professional fight, a 90-second stoppage of Travis Allen in August 2009.

Wilder then re-fractured the hand against Bermane Stiverne in January 2015, when he won the world title with a unanimous decision, but didn’t require surgery following the second break.

“I’ve had seven operations on my arm. Surgeries. Breaking my arm, tearing my biceps, breaking my hand. Many times in my fights I’ve broken my hand and still fought. [I've] torn my biceps, [suffered] third degree burns. I’m a true warrior. When I broke my and tore my biceps in the ring, my whole mentality changed to, ‘well, that mother f***** has to fall off," said Wilder.

[QUOTE=champion4ever;19356944]No, you are the one in denial that AJ is a cowardly scary little bi[COLOR="Black"]tc[/COLOR]h who is afraid of fighting Deontay Wilder. I presented to you all of the evidence. Most of the boxing public in the U.K. Knows this…

[QUOTE=Ake-Dawg;19354577]A hit dog will holla and you're screaming mighty loud.[/QUOTE] You are such a retard fan girl

[QUOTE=Sid-Knee;19355835]I'm the one in need of some help? As I say, i'm worried for those in your area. You can't dispute the facts no matter how much you don't like them. This wouldn't be a problem if you just accepted…

[QUOTE=Jax teller;19355877]He was actually making him walk so that he could see if Fury was wobbly or unfit to go on, looking to stop the fight, Fury passed the test and finished strong, the ref made the right call. Facts.[/QUOTE]I…