LOS ANGELES—Deontay Wilder survived the scariest 45 seconds of his eleven-year career during his fight last year with Luis Ortiz.

The Cuban stunned Wilder in the seventh stanza and was teeing off with a barrage that the Olympic bronze medalist winner miraculously staved off while surviving against the ropes.

The two fighters will meet again Nov. 23 for a rematch at the MGM Grand in Las Vegas in a FOX pay-per-view fight as Wilder looks to defend his WBC title for the ninth time since 2015. 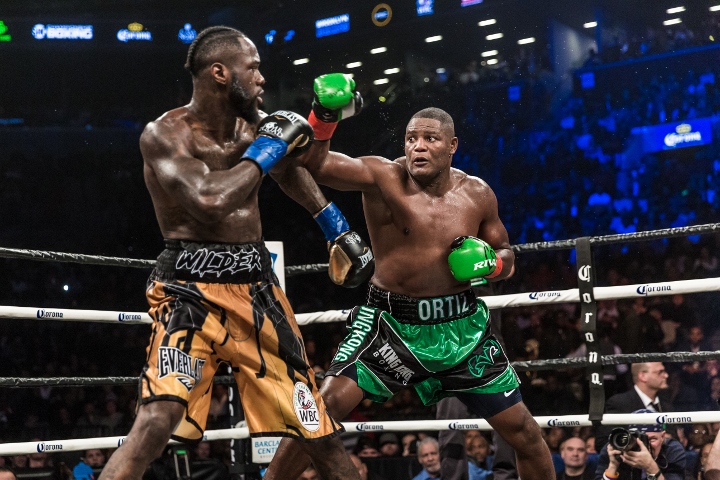 “In that seventh round, I was never hurt. People misunderstand being buzzed, and being hurt. I was very buzzed, but definitely wasn’t hurt,” he said. “My inner voice told me, ‘you got it. Keep going. Be sure to see the referee. You gotta keep punching or the ref will stop it.’ I kept coaching myself. If you’re hurt, you can’t do that.”

After nine rounds, Wilder, who was fighting that night with the flu, was ahead 85-84 on all three judges. He punished the punched out Ortiz in the 10th for a knockout.

“Facing him again, it will be a lot easier for me this time because there were a lot of things I did right in that fight. There was a lot of things he was smart about in that fight, especially when he got me. When he caught me, I knew he had me but I wanted to bluff it. That’s why I was pawing, but he knew I was bluffing.”

Wilder can’t afford another rocky round against Ortiz, who’s long been viewed as the boogeyman of the heavyweight division and has the power to stop a fight.

A win for Wilder means he can officially have his sights set on a rematch with Tyson Fury on Feb. 22, 2020.

Manouk Akopyan is a sports journalist and member of the Boxing Writers Assn. of America since 2011. He has written for the likes of the Guardian, USA Today, Philadelphia Inquirer, Men’s Health and NFL.com and currently does TV commentary for combat sports programming that airs on Fox Sports.  He can be reached on Twitter, Instagram, LinkedIn and YouTube at @ManoukAkopyan or via email at [email protected].

"Pretty buzzed" = hurt That's what you call a hurt fighter.

[QUOTE=Sid-Knee;20141699]Unless they want to protect someone who is in the position to get a massive payday if he stays champion. The judges did the same thing for Wilder in his very next fight against Fury.[/QUOTE] You're still not making any…

[QUOTE=DARTH SILKWORMS;20130004]You must not watch much boxing from New York. They do it ALL THE TIME for a-sides and b-sides of every nationality.[/QUOTE] Unless they want to protect someone who is in the position to get a massive payday if…

[QUOTE=Sid-Knee;20129754]Are you for real? Two non Americans in Ortiz and AJ weren't given that treatment. The American was though. We both know why. Lets not pretend here.[/QUOTE] You must not watch much boxing from New York. They do it ALL…