Deontay Wilder: I Won't Let This Gypsy Mess Up My Plans

Deontay Wilder considers December 1 the night he’ll really resonate with American sports fans that aren’t as aware of the hard-hitting heavyweight champion as they should be.

The undefeated knockout artist continues to predict he’ll stop unbeaten Brit Tyson Fury inside the distance when they fight for Wilder’s WBC heavyweight title at Staples Center in Los Angeles. That’s something Wladimir Klitschko couldn’t do in November 2015, when Fury upset the long-reigning champion to win the IBF, IBO, WBA and WBO heavyweight championships in Dusseldorf, Germany. 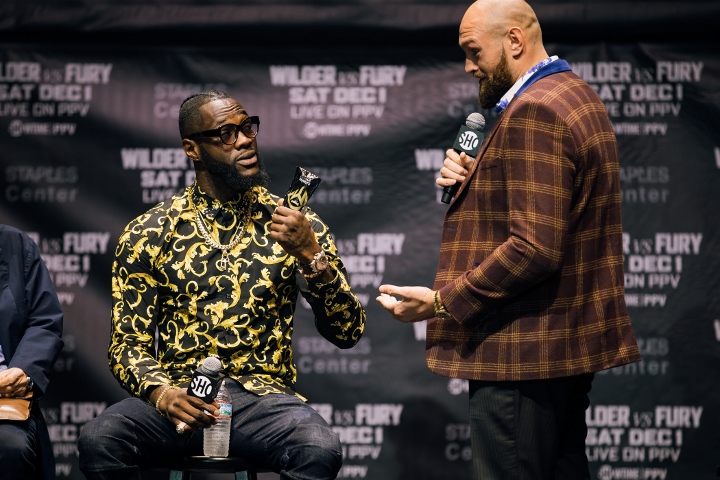 “This is the moment in time for America to wake up and understand they have the baddest man on the planet right here,” Wilder told Schaub. “And you think I’m gonna let this gypsy come in here and mess up all those plans for me? I don’t think so.”

Wilder, 33, is a slight favorite over Fury (27-0, 19 KOs), who has won two fights against nondescript opposition since ending a 2½-year layoff June 9. The Tuscaloosa, Alabama, native produced the most impressive victory of his career in his last fight – a 10th-round stoppage of Luis Ortiz on March 3 in Brooklyn.

The 6-feet-7 Wilder withstood severe trouble in the seventh round to drop the Cuban southpaw twice more in the 10th round. The 2008 Olympian previously dropped Ortiz (28-1, 24 KOs, 2 NC) in the fifth round.

The 6-feet-9 Fury figures he’ll out-box the unconventional Wilder (40-0, 39 KOs), whose devastating right hand has been the ultimate equalizer for technical flaws that sometimes make him susceptible to being out-boxed.

“Throughout my whole career, guys always said I only had one hand,” Wilder said. “But when you get in the ring, it’s gonna be different. The game plan is gonna go out the window, like Mike Tyson said.”

Here’s a link to Wilder’s entire interview with Schaub: https://www.youtube.com/watch?v=h4oM9mGFa8U.

Bit racist there Deontay. I am sure that you would not appreciate the N word used when referencing the African American race, correct?

[QUOTE=billeau2;19259681]We create the context. Words just pick up meaning as they take on different meanings. Words are Amoral. They are not ethical, or unethical. People cause offense by the way they choose to use a word. This gives the word…

Guys should quit boxing and go into promotion

[QUOTE=Reverb;19259562]It depends entirely on context. When it's used to define people as being lower than yourself by right of birth, it will rightly cause offense. There is a tone spread all over this thread in a few posts that the…