Deontay Wilder: The Extra Weight Will Only Slow Down Fury

Fury intentionally put on more weight because the lineal heavyweight champion claims he wants to aggressively go after Wilder, tire him out by leaning on him and eventually knock out the unbeaten WBC champion. England’s Fury weighed in at 273 pounds Friday for their rematch Saturday night at MGM Grand Garden Arena.

The 6-feet-9 Fury weighed 256½ pounds for their widely disputed split draw in December 2018 at Staples Center in Los Angeles. He officially out-weighed Wilder by 44 pounds in their first fight, and will take a slightly lower 42-pound advantage into their 12-round rematch.

“I’m not worried about that,” Wilder told ESPN’s Bernardo Osuna regarding Fury’s weight. “I’ve always had to fight bigger guys, bigger than I. You know, that’s just only gonna slow him down. And [him] holding the weight on me, I’m gonna rock with it, swing with it, rock with it. So, let him bring it on. You know, I’m not worried about his weight. All I’m telling him – don’t blink.” 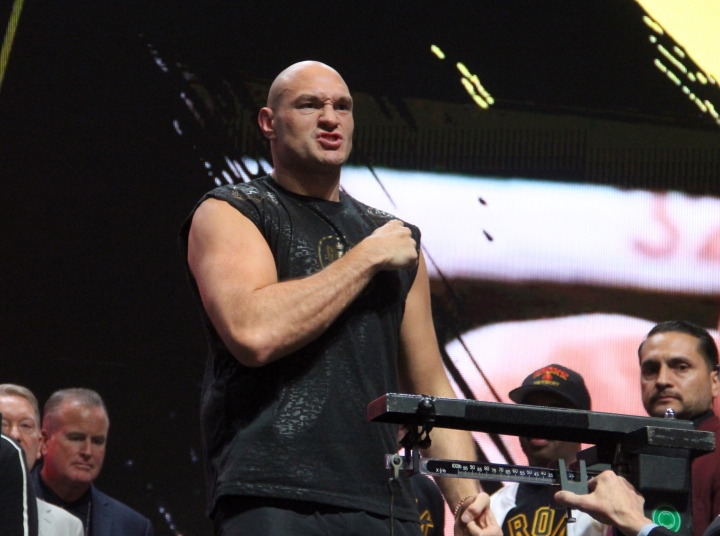 Before Friday, the 34-year-old Wilder had never weighed in at more than 229 pounds for a professional fight. Wilder (42-0-1, 41 KOs) officially came in at just 212½ pounds for their first fight, though, and was determined to be heavier for their rematch at least in part because he knew Fury would weigh at least 270 pounds.

“I mean, at the end of the day, we’re heavyweights, so it really doesn’t matter about the weight,” said Wilder, who floored Fury once apiece in the ninth and 12th rounds. “As you can see, throughout my whole career I’ve been underweight. I probably out-weighed my opponent maybe four times in my career. So, I really don’t care about weight. It just indicate that I’m in a better state and a better mind than the last time. And I’ve come for the pain.”

Fury’s athleticism, boxing ability and defense troubled Wilder at times 14 months ago. While Wilder expects Fury to be slower when they square off again, Fury thinks he’ll carry that additional weight well.

“I’ve been holding that weight the last two months in training camp,” Fury told FOX’s Kate Abdo after the weigh-in. “I’ve been sparring every day with it, training every day, so the weight’s not a problem. Two-hundred, seventy-three pounds of pure British beef.”

I love reading comments before a fight watching people try to think themselves into their fighter's victory. After Fury goes to sleep, make sure you stick around and own up to your words.

I dont think the weight will affect Fury early but probably it will late, if there is a late.

[QUOTE=deathofaclown;20406906]Fury just has a great engine anyway, so i think at 250 or 270, he will be fine. I think he just has the superior engine in pretty much any fight. I don’t think the weight of either guy is…

[QUOTE=champion4ever;20406580]Most boxing fans want to seeing Wilder coming in weighing what he did when he was only 17 years old. What 6'7, 34 year old grown ass man come to a heavyweight championship bout weighing under 210 lbs? 231 lbs…

Fury has been speaking of coming in at 270ish for ages. Wilder putting that weight on seems to be a reaction to Fury’s weight gain that he’s been open about. Wilder is dancing to Fury’s tune.