MIAMI—With the fight threatening to yet again go the way of his last several, Demetrius Andrade found a way to close the show.

Whether or not it finally leads to the superfight he’s long craved remains to be seen, although it certainly can’t hurt his chances any.

Providence’s Andrade successfully defended his middleweight title for the third time, taking out Ireland’s Luke Keeler in the 9th round of their main event Thursday evening which streamed live on DAZN from Meridian at Island Gardens in Miami, Florida.

Andrade scored two early knockdowns, but it was a late flurry which prompted referee Telis Assemenios to mercifully halt the contest at 2:59 of round nine.

“I went in there and thought I could put him out. So I took him out. I showed him I am not delusional. I got more knockdowns than I do fights, baby. I am entertaining. You gotta love it, I come to put on a show every time.”

For all of his talk of craving a middleweight superfight, the onus was on Andrade to make a statement with his performance. He sought to do just that, charging forward right out the gate and sending Keeler crashing to the canvas. The moment created false hope for an early ending, in fact eerily similar his 12-round wipeout of Poland’s Maciej Sulecki in his prior performance last June in his hometown of Providence, Rhode Island.

Keeler found himself back on the deck twice in round two. The first was yet the latest in an odd series of shoulder bumps by Andrade, an infraction for which he was gigged in the opening round. The unbeaten southpaw found his range in the final minute, crashing home a straight left which put Keeler flat on his back. The visiting Irishman beat the count and finished the round on his feet, which is where he remained throughout all of the third frame—and for the balance of the fight, which given its start was the only upset to come of the main event.

Andrade remained at close quarters for much of the bout, though his interest in closing the show decreasing with each passing round. Keeler did his best to turn things around, but his will alone wasn’t nearly enough to overcome the disparity in skill level between the two. Still, the first time challenger managed to sneak in enough right hands and also throw enough punches to get a rise out of the Irish supporters in attendance. 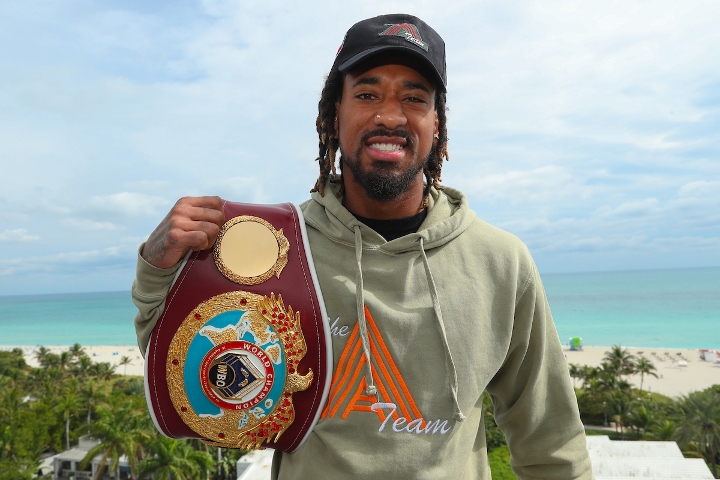 The crowd came alive in round nine, as Andrade had Keeler pinned along the ropes and threatening to end the night. Just when it appeared that Keeler would get out of harm’s way, Andrade found a way to bring closure to the post-midnight main event.

A left hand had Keeler out on his feet just as the 10-second clapper sounded. The visiting contender staggered into the ropes, getting caught with two more power shots before he was rescued by the third man.

“I thought it was good,” Andrade said in assessing his performance. “Luke Keeler is a warrior, a future champion. But not today, today was my day.

“I took him to deep waters and I sunk him.”

As for Andrade, the wins continue to pile up.

The defending middleweight titlist advances to 29-0 (18KOs), picking up the second stoppage win of his title reign and his earliest night at the office in more than four years. Not since a 2nd round stoppage way back in October 2017 has Andrade seen a bout end before the 12th round.  A last round stoppage of Artur Akavov marked his only middleweight bout to not go to the scorecards, having racked up lopsided decision wins over Walter Kautondokwa to win the crown and versus Sulecki in his previous performance.

Having moved on from this latest title defense, the demand moving forward is nothing but championship talent in the opposite corner.

At this very point following his win over Sulecki, the short list of opponents for Andrade was down to the division’s two most lucrative options—Saul ‘Canelo’ Alvarez and Gennadiy ‘GGG’ Golovkin.

Neither came close to materializing, nor will it be the case for his next fight. Alvarez (53-1-2, 36KOs) is still without a confirmed opponent for his next fight, but his own short list doesn’t include the unbeaten southpaw. Meanwhile, Golovkin is looking at a springtime mandatory title defense versus Poland’s Kamil Szeremeta.

Just as he did in the ring on Thursday, Andrade has learned to make an adjustment outside the ring and come up with a new list—one which is topped by revisiting old business.

“Listen, I wanted to go up to 168 to fight Billy Joe ‘Joke-Ass’ Saunders and that’s what I am looking to do,” insisted Andrade of the unbeaten two-division, whom he was supposed to fight for the middleweight title in October 2018. “Since Eddie has that big checkbook, that big bank, give Billy that check too so I can whoop his ass.”

Their bout was scrapped and Saunders stripped of his title after testing positive for the banned substance Oxilofrine. Andrade went to beat Kautondokwa for the vacant title, while Saunders moved up to 168 where he holds a title.

Another titleholder on the radar of Andrade—and promoter Eddie Hearn—is Jermall Charlo. The unbeaten Houston native has been wooed by this side of the equation for months, though so far without any luck.

“I’m not giving up on that,” claims Andrade. “Eddie Hearn sent the offer and didn’t get a response. If they want to send an offer this way, we will respond. Let’s get it on, Jermall. The boogeyman is here, baby!"