De La Hoya Slams Dana White: Shut The F*** Up, Save The UFC!

The UFC executive is steaming over last week's trilogy fight between UFC Hall of Famers Chuck Liddell and Tito Ortiz, which took place in Los Angeles - and the MMA pay-per-view was promoted by De La Hoya, who is now venturing into the pay-per-view market.

Liddell, who is 48-years-old and in active since 2010, was viciously knocked out in the first round. 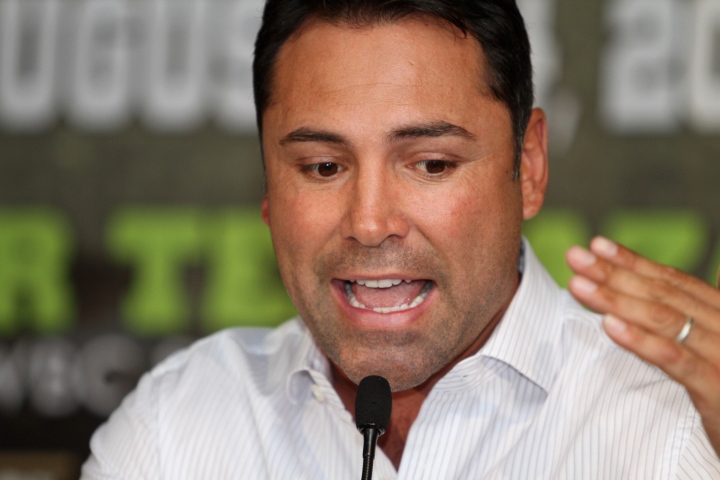 White made several attempts to persuade Liddell from going forward with the fight - pleading with the former UFC champion to remain in retirement.

De La Hoya, during an interview, made it clear that White had no place telling fighters when to retire.

That comment, combined with last week's outcome, sent White over the edge when discussing the entire series of events.

“Listen, I love Chuck Liddell and I don’t ever want to badmouth Chuck Liddell. People do think I’m badmouthing Chuck Liddell , but the reality is, first of all, lets says this first, I heard last week that the cokehead, ‘Oscar Del La Weirdo’ is talking sh*t, that I don’t have any place to tell guys when to retire. First of all, it’s called friendship you f***ing cokehead. I’ve been friends with Chuck Liddell for 20 years and the reality is that Chuck Liddell retired when he should’ve retired, eight or nine years ago whenever it was," White stated.

“The problem is Chuck Liddell was a fighter, Chuck Liddell loves to fight and that’s his passion in life. But there comes a day and age. Fighting is a young mans’ game. He can’t do it and Oscar Del La f***ing Hoya says ‘oh come over to Golden Boy where we respect the fighters and it makes me sick what the fighters were paid’ and all this sh*t. Out of 14 fights on the card, five fights were amateur bouts which means they didn’t pay them jack sh*t

“12 of the professional fighters on the card made less than $3k and $3k. What are you talking about you cokehead junkie? Some of the guys made $1k and $1k and he says that he respects the fighters so much? He couldn’t even remember their names at the press conference.

De La Hoya believes White jealous of his success and should place his full focus on the day to day business of the UFC, which the Golden CEO believes is now in a downward spiral

"Dana is so small and threatened by our success with DAZN and now in MMA that he is bringing up news from a decade ago to try to stay relevant," De La Hoya told TMZ Sports.

"Boxing has entirely rejected him. And, MMA fighters are now realizing they don’t have to risk their lives just so he can get rich. Golden Boy and I are moving forward and are bigger than ever. Dana should shut the f*** up and try to figure out how to save his own company."

Liddel was 48 years old and had zero reaction time or reflexes left. He made 48 year old fat george foreman look like prime Whitaker. Liddel shouldnt have been given a license to fight.

Both these guys are egotistical sleazebags. Oscar is a touch more classy and kinky, White is just a trashy tough guy wannabe. Good businessman but bad people.

The thing is, both of these guys are culpable and reprobates for similar reasons. White has been printing money off of the sweat of the fighters in the UFC and is now threatened... While ODLH can't be trusted to give…

It was a very ridiculous event. Liddell could hardly walk and was in no shape to fight. I side with Mr. White on this one.. I was a fan of De La Hoya during his career, not so much afterwards.…