Diego de la Hoya is still in search of his first win of 2019, but has at least made it closer to fight night than was the case his last attempted homecoming.

The 25-year old junior featherweight made weight for Saturday's headliner versus Venezuela's Renson Robles (16-6, 9KOs), which takes place in his hometown of Mexicali, Mexico.

De la Hoya (21-1, 10KOs; 1NC) tipped the scales at an announced 56 kilograms (confirmed by the weigh-in emcee as "making weight") for the main event, which will stream live on Golden Boy Promotions' Facebook Page (http://www.facebook.com/GoldenBoyFN). Robles tipped the scales at 122 pounds. 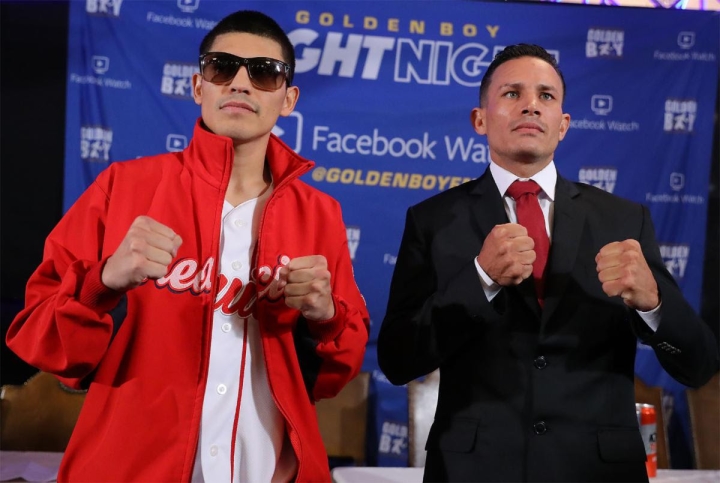 The bout being staged in familiar territory is a much-welcomed sight for de la Hoya—a cousin to Hall of Fame former six-division titlist and current promoter Oscar de la Hoya–who enters on heels of an upset knockout loss to Ronny Rios this past July. His lone career defeat came three months after having to settle for a two-round No Contest when a clash of heads abruptly ended his April clash versus Enrique Bernache in Monterrey, Mexico.

A year to forget to date trailed his failed attempt at fighting at home last November, when a fainting spell forced him to withdraw from a planned event in Mexicali. All told, it’s been more than 18 months since de la Hoya has last seen the win column, though hoping to change his luck as he finally makes his way to a ring in front of his hometown fans.

Robles has won his last three starts, all coming since his lone other trip to Mexico when he stood tall with unbeaten former bantamweight titlist Luis Nery before succumbing in seven rounds last December.

In the evening's chief support, Venezuela's Roger Gutierrez looks to maintain positive momentum as he faces locally based Andres Tapia (16-7-3, 9KOs) in a scheduled 10-round junior lightweight clash.

Gutierrez (23-3-1, 20KOs) checked in at 130 pounds, while the upset-minded Tapia weighed 129.4 pounds. Gutierrez has won four straight contests, including a shocking 1st round knockout of previously unbeaten top-rated 130-pound contender Eduardo 'Rocky' Hernandez, a bout which came on the same card as de la Hoya's aforementioned loss to Rios.

Tapia has won five in a row, all coming in his Mexicali hometown with Saturday's bout marking his third straight in this very venue.