Golden Boy Promotions CEO Oscar De La Hoya is planning an exotic location to host his company’s next event, which is scheduled to be headlined by rising lightweight star Ryan Garcia taking on Luke Campbell for a vacant interim world title.

They are due to fight on Jan. 2 in the main event of a DAZN-streamed card after the bout initially had been scheduled to take place on Dec. 5 at the Fantasy Springs Resort Casino in Indio, California, but postponed earlier this month when it was disclosed that Campbell had tested positive for Covid-19 and was unable train. 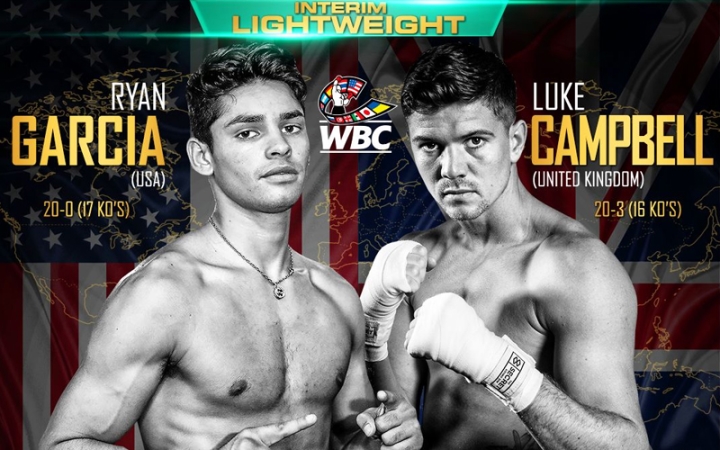 Now that Campbell is OK and back in training the fight has been rescheduled, and while De La Hoya and his team enjoy a strong relationship with Fantasy Springs, which has long been its go-to site, De La Hoya has other ideas for Garcia-Campbell. He wants to stage the event on a Mexican beach or in front of pyramids.

“I haven’t announced the location but starting in the new year obviously things are different now and we’ve got to think about and promote the non-traditional way because we don’t have fans (able to attend most events),” De La Hoya told BoxingScene on Tuesday. “Maybe you can have 20 percent (capacity of an arena with) fans in Texas so, you know, I have to start thinking way outside the box and I want to create events. I want to create events that are going to make news, events that are going to be promoted differently.”

That is where the site comes in for Garcia-Campbell, De La Hoya said.

“So, it’s very significant. Everything that’s happened with the pandemic, it’s put us in a position where we have to be on our toes and think differently as a promoter and think outside the box. So, it’s re-motivated me to really promote a fighter and make him a bigger star than what he is.”

So what are the chances that Garcia-Campbell really does wind up taking place outside on beach in Cancun or in front of the picturesque backdrop of the Aztec pyramids?

“We’re exploring it and it’s highly probable that we go there,” De La Hoya said.

When Matchroom Boxing promoter Eddie Hearn was able to bring his company’s events back with a four-week series of cards this past summer he also wanted an interesting site and wound up staging his “Fight Camp” shows at Matchroom’s headquarters in Brentwood, England – in the massive garden with the estate’s mansion as the backdrop.

“Ryan is a fighter who deserves to be in these types of events that are different,” De La Hoya said. “You don’t want to do the same venue, going to (Las) Vegas or to Texas or fighting at Fantasy Springs Casino. You want to be part of history and this would be historical, mix it up a little bit. I never fought with an Azteca pyramid as my backdrop.”

“I have huge plans for Ryan Garcia; 2021 we most definitely want to get him in there with the top guys,” De La Hoya said. “He’s been talking a lot about (lightweight and junior lightweight titlist) Gervonta ‘Tank’ Davis, which I love the fight. I would make that fight in a heartbeat, but first things first. Luke Campbell is no walk in the park.”

[QUOTE=The D3vil;20910528]I've been saying this for years. Boxing needs more "Thrillas in Manillas" and "Rumbles In The Jungles" More exotic locations, women, luxury, etc. . .to make it look like a truly big time sport, instead of a low rent…

I've been saying this for years. Boxing needs more "Thrillas in Manillas" and "Rumbles In The Jungles" More exotic locations, women, luxury, etc. . .to make it look like a truly big time sport, instead of a low rent hustle…

[QUOTE=Get em up;20908047]The question I pose is what fight has the most notable landmark as a back drop[/QUOTE] The St. Louis Arch?