De La Hoya: Pacquiao is Probably The Best I Ever Fought

Eight division world champion Manny Pacquiao is facing what could be the final opponent of his long career, when he returns on Sunday [Saturday in the United States] against Lucas “The Machine” Matthysse for the World Boxing Association "regular" welterweight belt.

Pacquiao, 39, is getting close to the end of his career and he's coming off a July 2017 decision loss to 2012 Australian Olympian Jeff Horn.

A second successive defeat, this time against the dangerous Argentine at Kuala Lumpur’s Axiata Arena on Sunday, could see walk away from the ring with no arguments. 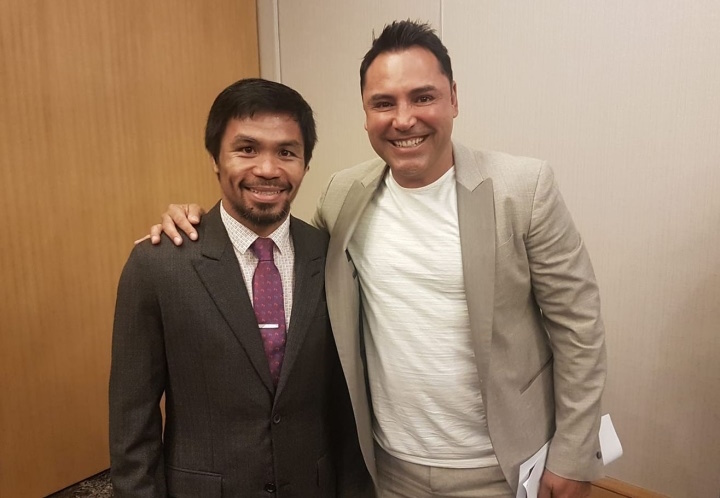 Pacquiao (59-7-2, 38 KOs) is a sure fire future Hall of Famer - with a tally of eight world titles in a record eight weight divisions.

A victory would see Pacquiao continue his career, even beyond his 40th birthday in December.

Pacquiao is going for his 60th victory since turning pro in 1995, but despite winning 38 of his first 47 fights by knockout, he has not stopped an opponent in nine years.

Over the course of his career, Pacquiao has fought a who's who of opponents.

He even battered and retired Matthysse's promoter, Oscar De La Hoya of Golden Boy Promotions, in 2008.

De La Hoya, who as a pro faced the likes of Julio Cesar Chavez, Felix Trinidad, Shane Mosley, Bernard Hopkins and Floyd Mayweather Jr., views Pacquiao as the likely best opponent that he ever faced.

“Probably Pacquiao,” De La Hoya, who won titles in six divisions, said when asked by the Manila Times who was the best fighter he faced.

“I think his determination, his conditioning, his skill, his power, his speed, his footwork. He was probably one of the fighters I’ve most appreciated.”

Should Pacquiao come out on top, there are several potential opponents for the immediate future - including a catch-weight bout with Vasyl Lomachenko, a rematch with Jeff Horn, or even a showdown with WBO welterweight champion Terence Crawford.

[QUOTE=NotaPachugger;18942871]ODLH was not in his prime when they fought . You just let everybody know you're not a true boxing fan just a Pac fan.[/QUOTE] Did i say that dela hoya is in his prime? No one dominated dela hoya…

No doubt that pac is the best ever he fought.

[QUOTE=pasawayako;18935986]It's true. No one dominated dela hoya in his entire career except Pac.[/QUOTE] ODLH was not in his prime when they fought . You just let everybody know you're not a true boxing fan just a Pac fan.