De La Hoya: Pacquiao-Matthysse is Sink or Swim For Both Guys

Manny Pacquiao is not scared by the punching power of Lucas Matthysse ahead of their WBA world welterweight title bout on Sunday.

Pacquiao returns to the ring in Kuala Lumpur a year after suffering the seventh loss of his career against Jeff Horn, the Australian taking a shock win on points.

The 39-year-old struggled against Horn's aggressive tactics in Brisbane and Matthysse – who has 39 wins from 43 bouts, 36 by knockout – is expected to take a similar approach. 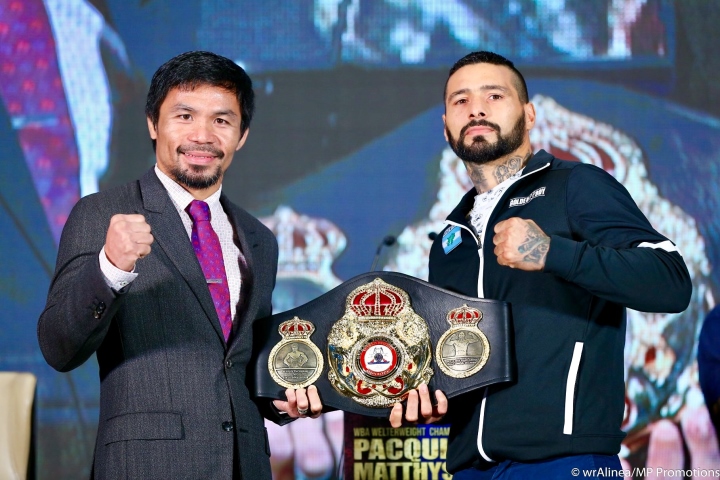 However, Pacquiao is not concerned about the challenge he faces this weekend, with Matthysse having achieved and eighth-round stoppage of Teerachai Sithmorseng last time out.

"When I saw his fight against Teerachai it was a good fight," Pacquiao told a news conference

"I believe we can create good action in the ring so the fans will be happy.

"I don't care if he has 36 knockouts...it's about your talent and skill inside the ring. Let's see on Sunday who will be the best."

Many have suggested defeat could bring about the end of the Filipino's illustrious career, but that is not something Matthysse will allow to affect his preparation.

"He's a great champion but he hasn't faced the 'great machine'," he said.

"If he decides to retire, that's his decision. I'm here to defend my title."

Golden Boy Promotions CEO Oscar De La Hoya, who promotes Matthysse, says the contest is do or die for both boxers.

"I noticed Pacquiao was special when part of the promotions of Pacquiao vs. Barrera. What I saw was his determination. His conditioning was incredible. His explosiveness was incredible. He had a great work ethic. He was very well prepared. I really don’t know how he is now. In boxing, you’re as good as your last fight. That’s what boxing is. That’s why this fight is important for Pacquiao to show that he is still the same Manny Pacquiao. You have to perform and show the people that you still have it. This is a sink or swim type of fight for both guys," De La Hoya said.

Oscar’s right. You’re only as good as your last fight. Both fighters might be past their primes but power is usually the last thing to go meaning Matthysse carries a punch. If Pacquiao can be half the fighter he was…

DELA HATER will be mentioning FLOYD again in another article b4 the fight Sat to help promote another PAC fight. Nobody is talking about the fight now.

[QUOTE]This is a sink or swim type of fight for both guys," De La Hoya said.[/QUOTE] Oscar you're not supposed to put your own fighter's back against the ropes.