Over and over, Golden Boy Promotions CEO Oscar De La Hoya used the word “frustration” to describe his feelings about the deteriorating relationship between his company, its star fighter Canelo Alvarez and their broadcast partner DAZN.

They are locked in a battle over Alvarez’s next opponent and the amount of money DAZN is on the hook for, which spilled over Tuesday when Alvarez sued DAZN, De La Hoya and Golden Boy in federal court for the Central District of California.

Alvarez, who is suing for breach of contract, intentional interference with a contract, negligent interference with a contract, fraud and breach of fiduciary duty, among other allegations, is seeking damages of at least $280 million – the remainder of what he is owed under the five-year, 11-fight, $365 million deal he signed in late 2018 – as well as punitive damages, attorneys’ fees, costs of the suit and “a judicial determination that he is eligible to participate in bouts arranged and promoted by entities other than Golden Boy Promotions and broadcast by entities other than DAZN.”

DAZN has approved super middleweight titleholders Callum Smith (27-0, 19 KOs) and Billy Joe Saunders (29-0, 14 KOs) as opponents for Alvarez (53-1-2, 36 KOs) but does not consider them to be “premium” opponents and does not want to pay Alvarez the $35 million he is due under his contract. What DAZN really wants is a third fight between Alvarez and fellow middleweight star Gennadiy Golovkin (40-1-1, 35 KOs), which it also has under exclusive nine-figure contract, but for a variety of reasons that fight won’t be next.

De La Hoya, despite a rocky relationship with Alvarez, came to his defense.

De La Hoya declined to get into specifics of what DAZN was offering but said, “They’re not living up to their contract.” 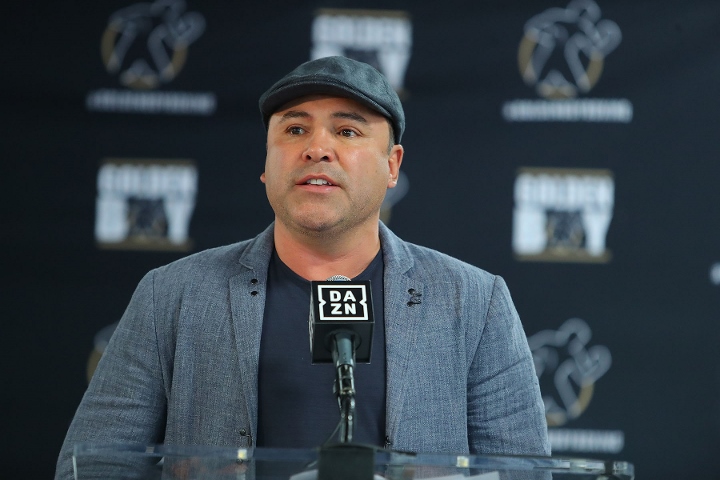 Sources with knowledge of the discussions told BoxingScene that DAZN would do a fight between Alvarez and Smith or Saunders but for less than half of what Alvarez is due under the agreement. Alvarez would also be taking a hit on his money because the fight would take place without ticket-buying fans due to the coronavirus pandemic.

“We’re obviously hoping we get back to normal very soon and we can hopefully have gate revenue as soon as possible, but we figured it out,” De La Hoya said of being able to do an Alvarez fight without a crowd. “The only worry I have is DAZN living up its contract.”

De La Hoya also said he did not agree with the notion that Smith and Saunders do not qualify as premium foes for Alvarez.

De La Hoya insisted the fight with Golovkin would have happened this month had it not been for the coronavirus pandemic. Alvarez was supposed to fight Saunders in May and Golovkin was due to fight mandatory challenger Kamil Szeremeta in the spring, and then they would have met for a third time in a fight that had been agreed to.

Adding to the issues between De La Hoya and DAZN is the fact that the streaming service is also supposed to broadcast monthly Golden Boy cards as well as do two cards per month of its Thursday night series featuring up-and-coming fighters.

As of now, DAZN is only committing to two main cards for the rest of the year (besides a potential Alvarez fight) and there are no Thursday shows in the works.

“It’s a frustration because we have 80-plus fighters. We have several world champions who are not fighting,” De La Hoya said. “But the truth of the matter is people want to see Canelo fight. That’s the bottom line. They want to see the biggest star in boxing fight on DAZN and people are getting fed up. I want to deliver the best fights possible.”

The two Golden Boy cards in play are one that would take place Oct. 17 or Oct. 30 and be headlined by former junior middleweight titlist and current middleweight contender Jaime Munguia (35-0, 28 KOs), 23, of Mexico, and the vacant interim lightweight title bout between Ryan Garcia (20-0, 17 KOs), 22, of Victorville, California, and England’s Luke Campbell (20-3, 16 KOs), 32, ticketed for late November or early December. However, according to Golden Boy, there are still issues over the money for that card.

With so few dates it leaves out the ability for Golden Boy to reschedule the light heavyweight fight between Sergey Kovalev and Sullivan Barrera, which was postponed from April 25 due to the pandemic, or have dates for junior lightweight world titlist Joseph Diaz Jr., junior middleweight titlist Patrick Teixeira, junior lightweight titlist Rene Alvarado or rising welterweight star Vergil Ortiz Jr., among others.

De La Hoya, as he said repeatedly, is frustrated – and that was before the Alvarez lawsuit dropped.