Oscar De La Hoya believes Saul Alvarez has the physique to cope with fighting at light-heavyweight in the future.

Saul ‘Canelo’ Alvarez wants to clean up at middleweight in 2019 but could campaign as high as light-heavyweight in the future, according to Oscar De La Hoya.

Mexican Alvarez puts his WBA and WBC titles at 160 pounds on the line when he faces IBF champion Danny Jacobs in Las Vegas this weekend. 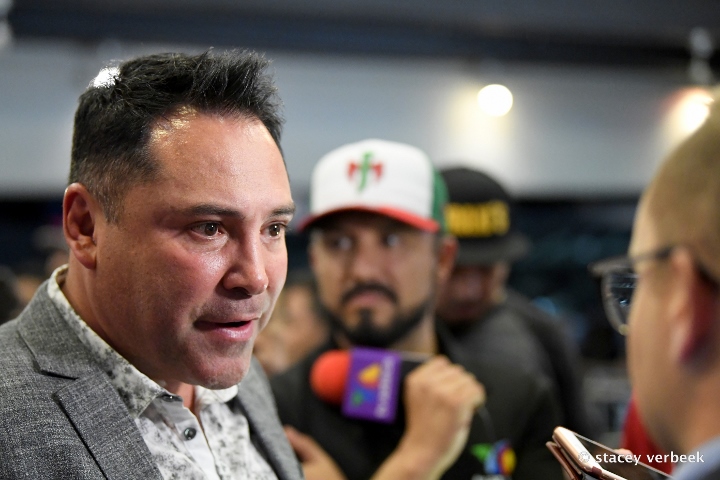 The winner will have three of the four major belts in their possession, with Demetrius Andrade – who holds the WBO strap – the other current champion at the limit.

While not looking beyond his next opponent, Canelo made clear he plans to unify the division, starting with Jacobs.

“That’s the goal. The first step in that goal is Jacobs on Saturday night,” Canelo told Omnisport.

“But that is the goal for this year, to win all the belts.”

He is already a three-weight world champion after stepping up to super-middleweight in his last outing, when he dismantled WBA ‘regular’ champion Rocky Fielding in New York at the end of last year.

However, according to De La Hoya, whose Golden Boy Promotions looks after Canelo, there may still be scope to go higher up.

“There are many possibilities for Canelo. It all depends on who is in line next for him, meaning who is the best opponent for him,” De La Hoya told Omnisport.

“Canelo at this moment has many options – we will take a look at what’s out there, what’s the best fight out there for him, after Jacobs, if he does win.”

On the possibility of campaigning at light-heavyweight, he added: “It’s very ambitious – but I don’t see it being impossible.

“One thing about Canelo is he’s a heavy fighter, in that I mean he has a thick neck. His legs are thick – he’s a fighter who goes up to 190 walking around after a fight.

“In the right fight, in the right moment, I believe he can conquer that division.”

Canelo vs kovalev,bivol,Artur,or gvozdyk all end horribly for the ginger. There's weight classes for a reason,and all of them have enough power to hurt him wherever they land.

[QUOTE=GlassJoey;19713158]Rocky Fielding is a big lad, he’ll be at 175 one day and Canelo might just step up around the same time[/QUOTE] Sure, he's a big guy but he was one of the worst "champions" in the division and they…

175??? Putting on 15 pounds of lean muscle? Only one realistic way of doing that.