De La Hoya: Mayweather Sr. is The Only Trainer I Want To Work With

If Oscar De La Hoya ever decides to make a full-fledged ring return, he’ll make sure that his corner includes a familiar face: his former trainer, Floyd Mayweather Sr.

De La Hoya (39-6, 30 KOs) and Mayweather Sr., the father of Floyd Mayweather Jr., famously worked together from late 2000 to 2006 and briefly in 2007. The  former multiple-weight titleholder has often expressed his fondness for his old trainer, going so far as to say that he was the best trainer he ever had. Only Mayweather Sr., De La Hoya says, can truly keep him disciplined and whip him into shape for a boxing comeback. After all, his intentions are to engage in a real fight, not just a low-grade exhibition, against a legitimate opponent.

“Floyd Mayweather Sr. is the only trainer that can tell me to wake up at 5 in the morning,” De La Hoya said. “He’s the only trainer who can push my buttons and make me work hard and smart. So I would actually go to him and humbly ask him to do a favor for me.” 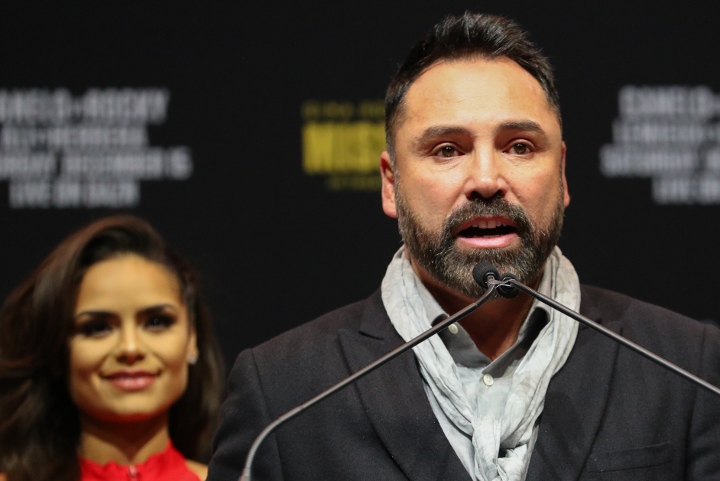 Currently, De La Hoya says he is working with a “small team” in Pasadena that monitors his body as he conducts his daily runs and other workouts.

“They’re making sure that all the fibers and muscles and tendons stay strong in order to take it up to the next level,” he said. “And that next level is starting my boxing camp. A serious boxing camp…it’s two or three levels that I have to get by and then step it up a notch and that notch is ultimately is sparring with big time fighters. Fighters who have experience, fighters who are championship caliber.”

De La Hoya’s comments arrive at a time as boxing tries to shakes itself out of a stasis imposed by the Covid-19 pandemic. His company is set to produce its first live boxing show during the pandemic in Indio, Calif. on July 24 featuring Vergil Ortiz in the main event against Samuel Vargas.

That’s one kind of resurgence. As far as his personal comeback goes, De La Hoya’s offered a loose timetable.

“By September, I’m hoping to spar 12 rounds on a regular basis,” he said. “By that time I do want to make that decision of fighting the first quarter of next year.”

He’s confident – despite the wear-and tear, the age, the inactivity – that he can be competitive in today’s landscape.

“I can do some damage to a few fighters out there,” De La Hoya said. “Skill is involved obviously. My power, you never lose power. Maybe my timing will be off a little, but that’s something I have to figure out when Im out there. There’s a lot of thing that come into play, but I strong feel that I can do it.”

[QUOTE=Mindgames;20663384]The same 160 where he said the power and size difference was too much when getting bashed up by Sturm and Bhop. And that's when he was reasonably young. It'll end in tears.[/QUOTE] Oh no doubt about it if he…

[QUOTE=The Big Dunn;20662958]I hope odh comes back. He’d either 1.get demolished or 2. he’d relapse before the fight and force the fight to be cancelled or 3. He’d get kicked out for sneaking a tranny wearing high heels and carrying…

[QUOTE=Buggy bear;20662816]Right sir I take it your talking about me , I come on here as a fan to engage in sensible dialogue without qualitfying or going on about past sporting achievements or being nasty or insulting .. I shall…

[QUOTE=chicken-;20662941]McGregor has a better chance at beating Floyd than Oscar lol...[/QUOTE] Yes, and slim has left town!