De La Hoya: Jacobs Jumped on Canelo Fight, GGG Not So Much

The contest was finalized last week, and likely takes place at the T-Mobile Arena in Las Vegas.

The deal came as a surprise, because only a short time earlier it appeared that Canelo was being steered to a potential trilogy fight with Gennady Golovkin. 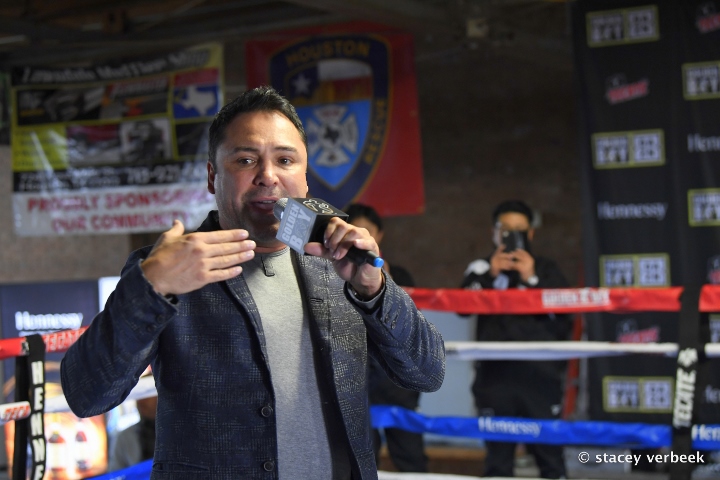 Golovkin and Canelo fought to a twelve round split draw in 2017, and then Canelo won a close decision in their 2018 rematch.

According to De La Hoya, Golovkin was dragging his feet when it came to making a deal for a third fight - while Jacobs and his handlers jumped on the opportunity.

"It was basically that Jacobs' people were very motivated to make the fight. Jacobs has been very vocal in fighting Canelo Alvarez, fighting the very best, and you have to respect that. Daniel Jacobs is a fighter, he's a warrior. We built him, we made him. I remember watching that devastating loss to Pirog, which broke my heart," De La Hoya told Fighthype.com.

"And then I had to find out he had cancer, wrapped around his spine. And now he's back, and the doctors said he wouldn't walk, and he's fighting for world titles - it's an incredible story. I remember Danny Jacobs forever.

"When I mentioned to Eric Gomez, to forget about Triple G, that they were taking their sweet time and let's move on... that the fight will maybe happen some time in the future. When I gave him the orders to make the fight with Jacobs, it happened instantly. They agreed to it really fast. It really has been a pleasure working with Jacobs to make this fight happen."

Jacobs was promoted by Golden Boy for most of his career and left them in 2015.

[QUOTE=Jab jab boom;19462474]anybody on earth who has had interactions with a female or has been in a relationship with a female, knows how they act. And it's not difficult to spot a guy with female like emotions. Such as yourself.…

[QUOTE=aboutfkntime;19462317]really ? funny that you are an expert on "[I]the most female thing a man can do[/I]"..... your continual crying in public, is right up there bro[/QUOTE] anybody on earth who has had interactions with a female or has been…

[QUOTE=Jab jab boom;19461113]actually, [B][SIZE="3"]the most female thing a man can do [/SIZE][/B]is jump into a debate between 2 other people that doesn't even concern him. Take your 58 yr old arthritic ass to sleep before I embarrass you too.[/QUOTE] really…

[QUOTE=Jab jab boom;19461515]meanwhile he calls everyone racist who doesn't cream on themselves over canelo or Mikey or any other Mexican fighter he's obsessed with. He's basically the equivalent of Jim Carrey in cable guy when it comes to boxers.[/QUOTE] Mexican…

[QUOTE=chrisJS;19461490]Once he started getting racist (I mean real hateful racism towards a couple of black posters) I got too sick of him and then he'd make a bunch of claims then he'd duck my bets which proved he's not a…