De La Hoya: If I Had Wilder - He'd Be a Star, Joshua Would Beg

De La HOya's company had promoted Wilder's first 33 fights and took him to a world title.

Their relationship ended in January of 2015, after Wilder captured the WBC title with a twelve round unanimous decision over Bermane Stiverne at the MGM Grand in Las Vegas. 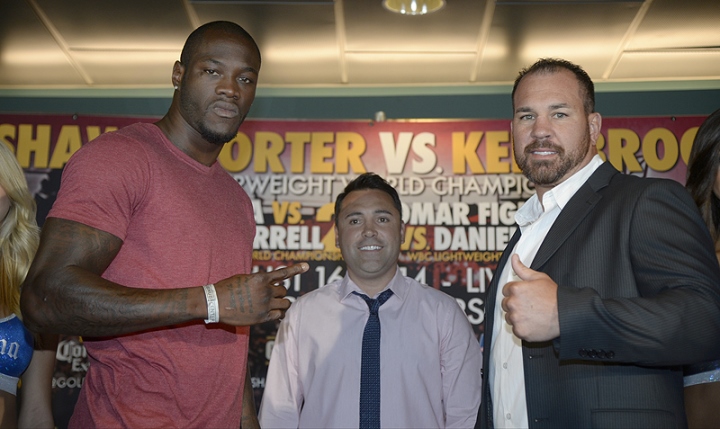 At the moment, one of the biggest fights in the sport is a heavyweight unification between Wilder and IBF, IBO, WBA world champion Anthony Joshua (20-0, 20 KOs) of the UK.

Wilder, who last Saturday night demolished Stiverne in the first round of their mandated rematch, has been actively chasing Joshua for a unification showdown.

De La Hoya believes Wilder should be a lot bigger right now. He says Golden Boy would have made him into a superstar by this point, and Joshua would be the one chasing Wilder for a fight and not the other way around.

"I promoted Deontay Wilder during his first 33 fights and I made him a champion. If I were his promoter, he would be a star and Anthony Joshua would beg for the fight and not the way it is happening right now," said De La Hoya to ESPN Deportes.

If Wilder is unable to get Joshua in the ring, one of the frontrunners to face him in the first quarter of the New Year is Dominic Breazeale.

[QUOTE=BigStomps;18205945]I'm giving Golden Boy promotions the credit. Not Oscar in particular.[/QUOTE] The Golden Boy Promotions, the company, that built Canelo is no longer there though. Schaefer was removed, his #2 was removed, I believe the matchmaker under Schaefer left, and…

[QUOTE=Scipio2009;18205855]Canelo blew up when Oscar wasn't there; if you want to keep giving Oscar credit for someone else's work, that's on you.[/QUOTE] I'm giving Golden Boy promotions the credit. Not Oscar in particular.

AJ Makes around 20 Mil dollars per fight now. He wouldn't have to beg for anything. The one who is begging is Deon the NFL player

[QUOTE=Scipio2009;18202818]Oscar didn't make Canelo though. He was already a budding star in Mexico and Schaefer/Floyd basically helped launch him in the US to stardom (where Oscar then showed up with the finished product, jumping to HBO). You can't earnestly give…