De La Hoya: I strongly feel Golden Boy MMA will not be a one-off

White has tried to sign several high profile boxers, but things have not gone as planned. 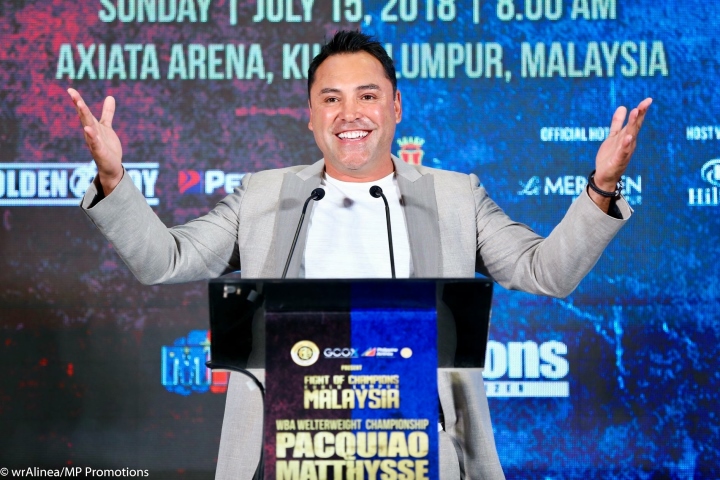 The UFC is the most successful company in mixed martial arts.

De La Hoya believes their fighters are not getting paid appropriately - and he wants Golden Boy MMA to restructure and retool the way that MMA fighters are compensated.

Part of that restructure, is to have the fighters - at least in the top spot - get a percentage of every revenue source.

Golden Boy MMA has set down their first event, for November 24 at The Forum in Inglewood, California. In the main event that evening, Tito Ortiz (19-12-1) and Chuck Liddell (21-8) will collide in a trilogy fight. Liddell, who is 48-years-old, won both of the previous meetings by knockout.

"[Fighters getting low pay] makes me sick to my stomach. [I want] to make sure the fighters are treated fairly, making sure they have an outlet to make as much money as possible, and to find the next superstars in the sport," De La Hoya told ESPN.

"[Liddell and Ortiz] are going to make the most money they have made in their careers. I know that as a fact. It's a big game-changer for both guys. What fighter in the UFC can say that, other than maybe Conor McGregor? I do have to say in the beginning I did criticize MMA. The truth of the matter is I did feel threatened. The fact that MMA has grown so much, the fact that that the UFC has taken over, I felt a little threatened.

"It was my mistake to attack the MMA world, but I respect it like there's no tomorrow. These fighters are in there risking their lives and I strongly feel they deserve the best compensation they can get a hold of. I strongly feel this will not be a one-off. There's a lot of room for growth in this sport and I'm just another player in the ballgame. There's nothing wrong with that."

[quote=g g g;19079449]had you so shook when you saw my username that it took you one day to find the balls to reply. You still fear me. You'll always me by son, never forget that.[/quote] get f[b]uc[/b]king lost forever

[QUOTE=BigStomps;19077488]Quit hating on another man cause he's trying to invest and succeed in something and you're still a loser with no goals or aspirations and living in your momma's basement. Loser![/QUOTE] That's cool and all, but why you get banned?…

[QUOTE=G G G;19079449]Had you so shook when you saw my username that it took you one day to find the balls to reply. You still fear me. You'll always me by son, never forget that.[/QUOTE] Sure, pa[B]ctard[/B] turned bumlover.

Are you (BigStomps) Oscar’s momma?

Are you oscar’s momma?