Earlier this week, rumors ran wild of a trilogy agreement after the Nevada State Athletic Commission erroneously listed an event for Cinco De Mayo weekend with Golden Boy Promotions and GGG Promotions as the listed co-promoters.

"We just made the phone call and the state athletic commission made a mistake," De La Hoya said to Brian Campbell of CBS Sports. "We have the hold for Canelo and it's for an [opponent] to be announced. There is nothing set in stone and we haven't even talked to Tom Loeffler's people. There is no Golovkin fight whatsoever next year. We haven't even discussed it and I haven't thought about it. First things first is Dec. 15 and Rocky." 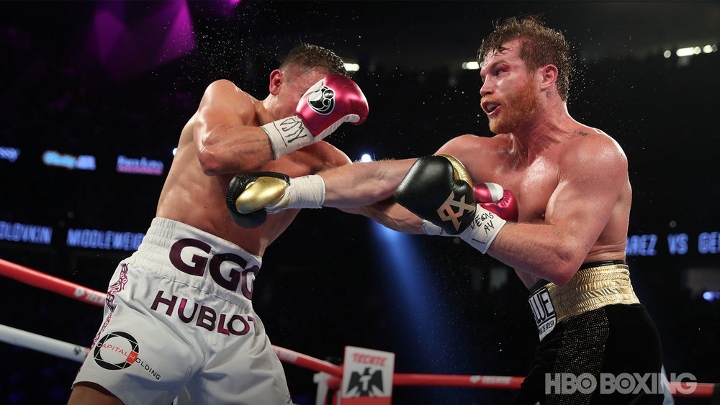 He's moving up to the super middleweight division for a fight with WBA "regular" champion Rocky Fielding.

De La Hoya has no problem with doing a third fight in the future - and apparently has no issue with staging a fourth and even a fifth encounter.

"Should there be [a third fight]? Would there be? Absolutely!" De La Hoya said. "There has to be a third fight, maybe even a fourth fight or a fifth. I sure hope so! But there is nothing for Cinco de Mayo or even for September with Golovkin.

"Canelo bullied the bully [in their rematch]. That's the only way he's going to beat Golovkin. If you push Glolovkin back, he can not fight going backwards. Golovkin knows one mode and that's forward. Canelo did a great job and if they fight again, I strongly believe Canelo will knock him out. And if they fight for a fourth time, Canelo will win again."

[QUOTE=aboutfkntime;19361132]LMAO :lol1::lol1: the [B]REAL [/B]Mexican, beat the Mexican out of the [B]FAKE [/B]Mexican[/QUOTE] After feeling a couple body shots he said this is Real Mexican Style phuk that...I rather get yelled at by my trainer for backing up and bytching…

[QUOTE=Mexican_Puppet;19359797]But, but but the jab, Doe, the piston jab of GGG Fu.ck.[/QUOTE] Better to look like a hypocrite, get clowned with memes and have your own trainer who doesn't think you won the fight tell the world that wasn't the…

[QUOTE=Mexican_Puppet;19359711]GGG does not have the balls to fight in the short distance against Canelo He only do that against Brook or Vanes kind of fighters...[/QUOTE] [IMG]https://pbs.twimg.com/media/DnQussUX4AAG-sg?format=jpg[/IMG]