It's clear that there is an impasse as it relates to the negotiations between unified middleweight champion Gennady Golovkin (38-0-1, 34 KOs) and Mexican superstar Saul 'Canelo' Alvarez (49-1-2, 34 KOs).

The two boxers fought to a controversial twelve round split draw in September 2017 at the T-Mobile Arena in Las Vegas.

The two sides had been negotiating the terms for the rematch, targeted for September 15th - which is when Canelo plans to return. 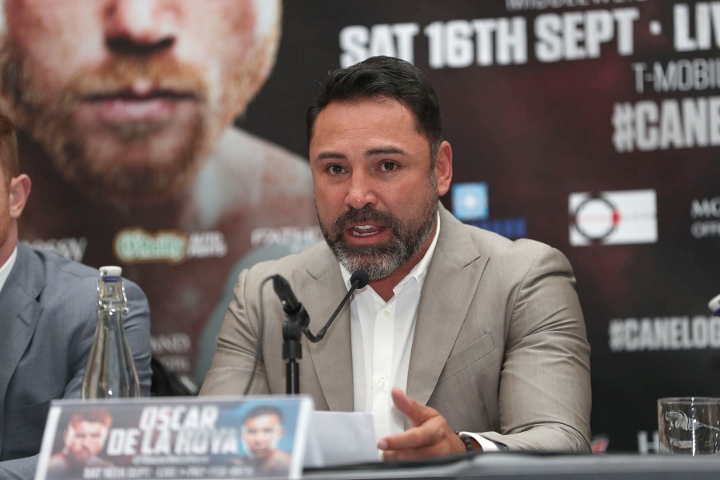 According to Canelo's promoter, Golden Boy Promotions, Golovkin is balking at the fight for whatever reason.

And with that, they say they have begun to reach out to other middleweights - such as Daniel Jacobs and Billy Joe Saunders - looking for a new dance partner to face Canelo in his planned return.

"We have reached out to Eddie Hearn (who promotes Jacobs), we're going to talk to him later today. I spoke with Frank Warren(who represents Saunders, the WBO titlist), those two are right there," said Eric Gomez, the president of Golden Boy, to BoxingScene.com.

"I spoke with (Spike) O'Sullivan's guy, he's interested. We haven't reached out to (Jermall) Charlo but we'll reach out to him, as well.

The founder of Golden Boy, Oscar De La Hoya, stated to BoxingScene - "(Golovkin's) going to make the biggest payday of his life and he's out there dealing with the IBF, a mandatory (Sergey Derevyancheko) who's 11-0. Go ahead and fight him for a million dollars, fine. So we're not waiting for Golovkin anymore."

"They've had the contract for six weeks so it makes no sense," added De La Hoya. "We've gone through everything to try to make this fight, Look, 'Canelo' did the VADA testing, the commission even tested before VADA, did the hair follicle test. What else do we have to do?"

Making $1 million a fight is now something to laugh at. Can't even win ten bucks on lotto tickets.

They had an agreement in place for May 5th. Why not just change the date and go ... no real need to rewrite and re-agree on things ... :boxing: PS - I agree with Letmaku. Boxing needs to bring back…

If Canelo doesn't get triple G in September then I got no problem if he fights Spike . It would be a whole year since he stepped in a ring so his team and Oscar are not going to throw…

GGG should understand at this point of his boxing career that he is not gonna achieve greatness anymore specially Fighting fraud Nelo, but what he does get with Nelo is a payday and that is the smarter way to go,…

These two cheaters, one with Mexican meat & the other with size/weight advantage are not worthy of my time. VADA all boxers and bring back same day weigh-in!