The unbeaten middleweight titlist is set to defend his strap, having made eight for his showdown versus Poland’s Maciej Sulecki this Saturday at Dunkin Donuts Center in Andrade’s hometown of Providence, Rhode Island.

Andrade (27-0 17KOs) weighed 159.9 pounds for the second defense of the middleweight title he claimed just eight months ago. Sulecki (28-1, 11KOs) checked in at 159.5 pounds for his first career title fight. 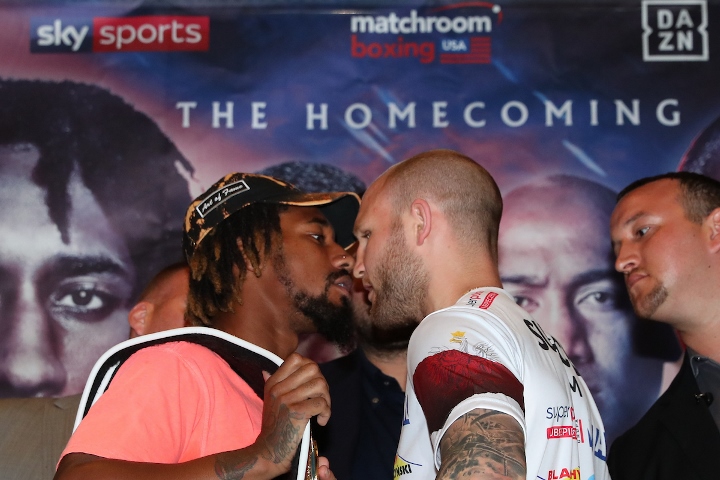 Saturday’s show—which streams live on DAZN (Saturday, 9:00pm ET)—marks Andrade’s first career fight in Providence, having fought throughout the New England area but never in his hometown. His title win took place an hour away, with the 2008 U.S. Olympian claiming a 12-round win over previously unbeaten Walter Kautondokwa last October in Boston, Mass.

Less than three months later came his first defense and most recent outing, a 12th round stoppage of Artur Akavov this past January at Madison Square Garden’s Hulu Theatre in New York City. A win on Saturday could put him in the direct path of World (lineal) champion Saul ‘Canelo’ Alvarez, who has yet to name an opponent for his next planned fight, tentatively slated to take place in September.

Sulecki enters on the heels of a thrilling 10-round victory over Gabriel Rosado this past March on the road in Rosado’s hometown of Philadelphia, Penn. The two traded knockdowns, both hitting the canvas twice each with Sulecki’s pair of trips to the deck coming in round nine after having seemingly had the fight in the bag.

He was forced to settle for a majority decision in securing his first career title shot, which also marks his third true road trip in his past four starts. Sulecki came up short in a 12-round loss to Daniel Jacobs last April in Brooklyn, New York. Wedged in between the away games was a win over Jean Michel Hamilcaro last November in Gilwice, Poland.

In the evening’s chief support, former heavyweight titlist Joseph Parker makes his DAZN debut in a 12-round clash with Australia’s Alex Leapai.

Parker (25-2, 19KOs) weighed 241.5 pounds for the contest, the fourth away from his native New Zealand within his past five starts. His previous three road trips landed in the United Kingdom—a Sept. 2017 successful title defense versus Hughie Fury in Manchester, England; a title-losing effort to Anthony Joshua in their unification clash in Cardiff, Wales last March; and a 12-round loss to Dillian Whyte last July in London, England.

Leapai (32-7-4, 26KOs)–who suffered a 6th round knockout loss to then-World heavyweight champion Wiadimir Klitschko in April 2014—tipped the scales at a beefy 254.2 pounds for his first career fight in the United States. The pairing of Samoan heavyweights stateside came about after Leapai stepped in for fringe contender Eric Molina, who withdrew for undisclosed reasons.

Yafai (25-0, 15KOs) weighed 114.5 pounds, chugging a sports drink before chugging on the scale in supreme confidence he would make weight. Dominican Republic’s Jimenez (29-8-4) also tipped the scales at 114.5 pounds.

The bout will mark Yafai’s fourth attempted defense of the 115-pound title he claimed in a 12-round win over former flyweight titlist Luis ‘Nica’ Concepcion in Dec. ’16. He fights for the first time in 2019, his last fight resulting in a disputed 12-round nod over Israezl Gonzalez last November in Monte Carlo, Monaco.

Jimenez enters his second major title fight and first trip to the United States. The 28-year old Dominican was horribly mismanaged upon turning pro in 2010, thrown to the wolves early in amassing a 3-8-2 record through his first 13 fights. He is unbeaten in his last 28 starts (26-0-2), including a Dec. 2014 draw with then 115-pound titlist Kohei Kono on the road in Japan. There is no shortage of confidence on his part, with Friday's weigh-in staredown resulting in Yafai getting his face and Jimenez giving a one-handed shove to the chest of the unbeaten titlist in return.

The winner of Saturday's super flyweight title fight will be mandated to next defend versus Australia's Andrew Moloney, who fully plans to enforce such status.

[QUOTE=Jubei;19865987]Blocking and Tackling to keep GGG and Canelo safe? WTF? By fighting this guy who almost got koed by washed up Rosado? By fighting Artur Akavov and Walter Kaudondokwa, absolute nobodies? Hilarious. This guy is all talk, he only wants…

[QUOTE=Fire4231;19865471]Andrade and Charlo fights are coincidentally scheduled on the same night. Wow DAZN is really using Andrade. He is becoming the 160 Dillion Whyte. Doing the blocking and tackling to keep GGG and Canelo safe. Do they really think his…

[QUOTE=Fire4231;19865471]Andrade and Charlo fights are coincidentally scheduled on the same night. Wow DAZN is really using Andrade. He is becoming the 160 Dillion Whyte. Doing the blocking and tackling to keep GGG and Canelo safe. Do they really think his…

Andrade and Charlo fights are coincidentally scheduled on the same night. Wow DAZN is really using Andrade. He is becoming the 160 Dillion Whyte. Doing the blocking and tackling to keep GGG and Canelo safe. Do they really think his…