Devin Haney is fighting fit for his DAZN USA debut.

The unbeaten lightweight contender is set for his 10-round main event versus Mexico’s Antonio Moran, as both easily made weight for their clash Saturday evening at MGM National Harbor in Oxon Hill, Md. 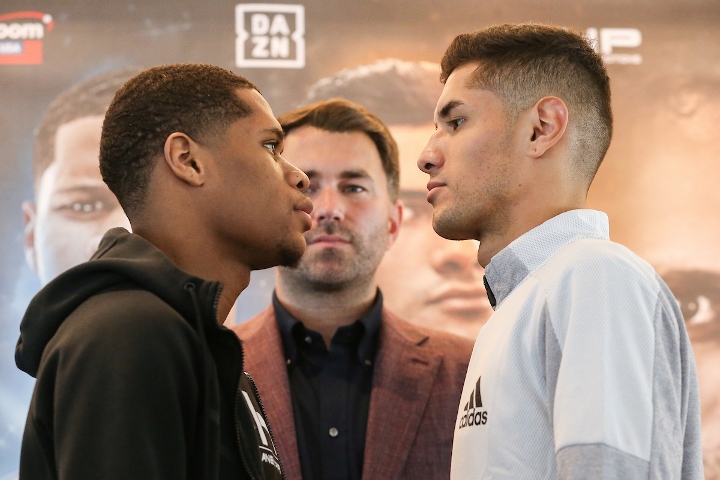 Their bout was elevated to headlining status after 2018 Fighter of the Year and reigning cruiserweight king Oleksandr Usyk was forced to withdraw after suffering an untimely injury. Usyk was due to make his heavyweight debut atop the show versus Carlos Takam, but with his plans to conquer a new division now pushed back until later this summer.

Haney, a 20-year old rising star, is coming off of a 10-round shutout win over previously undefeated Xolisani Ndongeni this past January. The Las Vegas-based boxer is being groomed for a lightweight title run later this year, originally hoping to face Luke Campbell for a vacant belt this summer.

Those plans were squashed by the World Boxing Council, however, who ruled in favor of unified titlist Vasiliy Lomachenko challenging Campbell for their vacant title. With a win on Saturday, Haney will be ordered to begin negotiations with Russia’s Zaur Abdullaev for a final eliminator to determine the next mandatory challenger.

Moran (24-3, 17KOs)—a regular on the Telemundo circuit—has won four of his past five starts. The lone defeat during that stretch came last summer in a narrow 10-round decision to Jose Pedraza, who went on to dethrone Ray Beltran in his next fight to become a two-division titlist.

In the evening’s chief support, Michael Hunter checked in at 215.6 pounds for a scheduled 10-round clash with Brazil’s Fabio Maldonado (26-2, 25KOs), a 39-year old former MMA participant who tipped the scales at a fleshy 241 pounds.

Hunter (16-1, 11KOs)—whose father of the same name was a mid-level heavyweight contender in the 1980s and 1990s—was teased as a candidate to land the June 1 assignment versus unbeaten heavyweight titlist Anthony Joshua. He instead takes a showcase fight here, looking to extend his current four-fight win streak since losing a 12-round cruiserweight title fight to Usyk two years ago int his very venue.

An indication in the strength of opposition endured by unbeaten, unified lightweight titlist Katie Taylor comes in a super lightweight title unification bout between two of her past victims.

Chicago’s Jessica McCaskill weighed a ripped and ready 138.8 pounds for the first defense of her WBC 140-pound title versus Argentina’s Anahi Sanchez, who came in a trim and fit 138 pounds in her own first defense of the WBA strap.

Taylor beat both boxers in succession, winning her first title in an Oct. 2017 decision over Sanchez–whom had already conceded the title at the scales after missing the lightweight limit—and then registering her first defense in a 10-round nod over McCaskill just two months later.

McCaskill went on to win the title in her very next fight, coming last October at home in Chicago on the very first DAZN card to take place in the U.S. Sanchez claimed her title two fights later, scoring a 1st round knockout of Diana Ayala in their interim title fight just five weeks ago, receiving an upgrade to full titlist immediately thereafter.

Also on the show, Croatia’s Filip Hrgovic makes his U.S. debut, as the unbeaten heavyweight faces Texas native Gregory Corbin in a scheduled 10-round contest.

They went back and made corrections...

Haney now relegated to obscurity on an app no one has

[QUOTE=CauliflowerEars;19769724]So hey what's the correct weight Hrgovic came in at ? In your other post you have it 242, but it says 225 in this article.[/QUOTE] Diamante announced 242 and that's what Matchoom listed as well