Veteran spoiler Carlos Morales looks to close out 2019 with his third win of the year as he takes on former title challenger Mercito Gesta. Both boxers made weight ahead of their scheduled 10-round lightweight bout, which takes place on a Golden Boy Promotions show Thursday evening live on DAZN from Belasco Theater in Los Angeles, California. (photo by Tom Hogan)

A two-fight win streak precedes Morales' latest ring adventure, though to date he remains best known for his tough losses. The Highland Park-based Mexican slugger gave highly touted Ryan Garcia all that he could handle in a hard-fought 10-round loss to the rising prospect last September, and also came up just short two months later in a 12-round defeat to Rene Alvarado who will fight for a 130-pound title in a rematch with Andrew Cancio later this month. 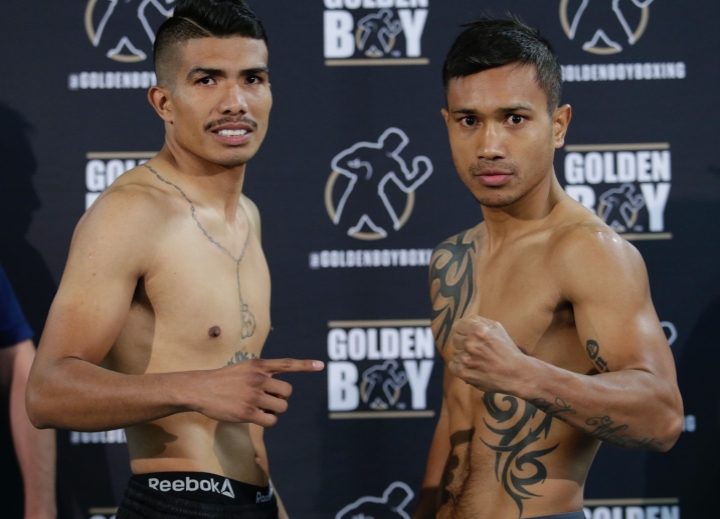 Gesta has dropped two of his last three, including a ninth round upset stoppage at the hands of Juan Antonio Rodriguez this past March in Hollywood, California. The 32-year old southpaw from San Diego by way of Cebu, Philippines has come up short in title fights with Miguel Vazquez and Jorge Linares, but has generally come up aces at the mid-level contender level including a 10-round nod over rising contender Robert Manazarez last June.

Also on the show, local favorite Charles Huerta faces Puerto Rico's Jonathan Oquendo in a 10 round junior lightweight clash. Huerta (21-6, 12KOs) weighed 129.4 pounds as he looks to pick up his fourth win in his last five starts. Oquendo-whose lead promoter is legendary former four-division champ Miguel Cotto—weighed 129.8 pounds as he looks to rebound from a tightly contested defeat to recent title challenger Lamont Roach Jr. in May.

This should be a fun crossroads fight. A lot on the line winner puts himself in line for another title shot/big fight. Loser is now gatekeeper for young fighters or maybe retires.

This is arguably the best fight this weekend..N it's on regular dazn, for those wondering.