Both boxers came in at the contracted welterweight limit for Saturday's DAZN-streamed main event at Verizon Theatre in Ortiz's hometown of Grand Prairie. Texas.

Ortiz Jr. (13-0, 13KOs) came in right at the 147-pound welterweight limit, his second straight bout above the 140-pound division to which he will likely never return. 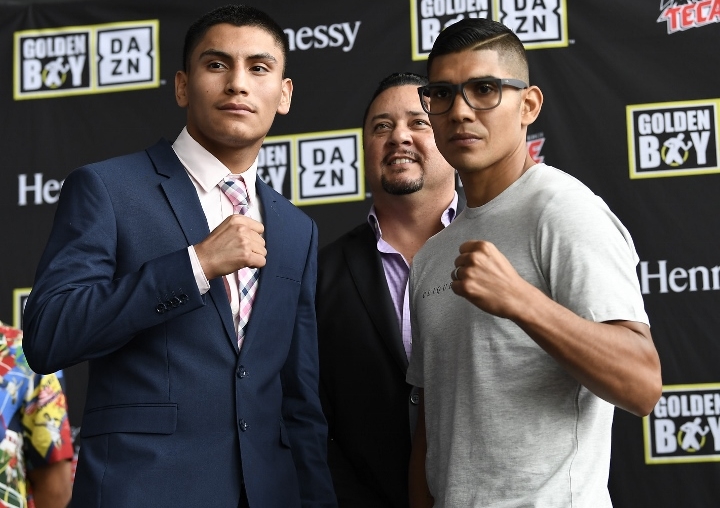 Saturday's hometown headliner for Ortiz Jr. comes just three months after a breakout 3rd round knockout of veteran Mauricio Herrera, whom had never been stopped prior to their May clash in Las Vegas, Nevada. The bout came on the DAZN undercard of Saul ‘Canelo’ Alvarez’s 12-round win over Daniel Jacobs in a three-belt middleweight title unification clash which served as the streaming platform’s most watched event to date.

Orozco hopes to slow down his opponent’s bum rush, all while in need of a big career win himself. The 31-year old from San Diego, Calif. by way of Baja Cruz, Mexico enters on the heels of a 10-round decision win in March, his first fight since his suffering lone career loss in a title bid versus Jose Ramirez (now a unified 140-pound titlist) last September.

The chief supports pits all-too familiar rivals Joshua Franco and Oscar Negrete in a 10-round bantamweight scrap. It will mark their straight time facing one another, with the first fight ending in a draw and San Antonio's Franco (15-1-1, 7KOs) taking a 10-round split decision this past April.

In the opening bout of the main stream, unbeaten lightweight prospect Hector Tanajara (17-0, 5KOs) faces Argentina's Ezequil Aviles (16-3-3) in a 10-round bout.

Vergil looks the part and has a great head on his shoulders. Orozco is no bum only 1 loss to Ramirez who is elite. If Vergil knocks him out that's a huge statement

[QUOTE=millcitymauler;19975262]Virgil seems to have some pretty small fists. Can't wait for this fight though...[/QUOTE] Yea given the way he fights seems likely he will have hand problems in the future.

This is the fight I was waiting for!!!!!

Looking forward to this one, lets see where it gos

I'm excited to see some new talent coming up at WW, we'll see how far Ortiz can go. Orozco is not a pushover