Any massacre to take place on St. Valentine's Day will be saved for the action in the ring.

Ryan Garcia and Francisco Fonseca made weight along with all other participants due to appear on the four-fight main portion of a DAZN livestream, airing Friday evening from the Honda Center in Anaheim, California. 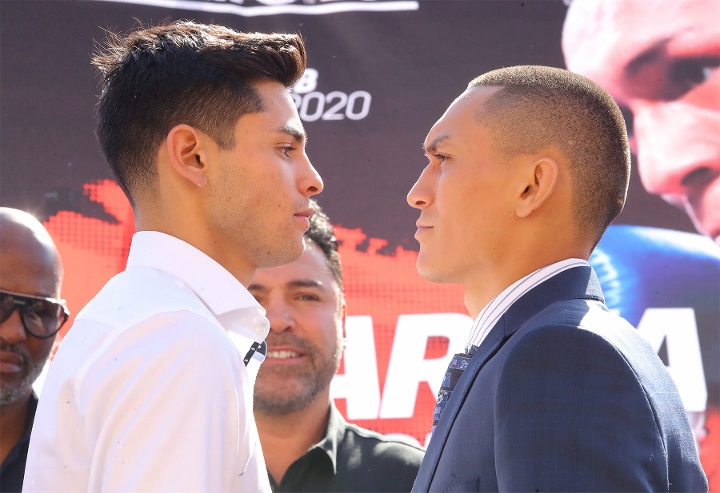 Garcia has vowed to capture his first major title in 2020, although his next opponent could be determined by the time he steps into the ring.

That will depend on whether Jorge Linares can remain in the win column. The former three-division titlist didn't have any issue in returning all the way down to the lightweight division, where he faces California's Carlos Morales in a 10-round co-feature.

Linares came in at 134.8 pounds in search of his second straight win following a stunning 1st round knockout loss to Pablo Cano last January. Morales tipped the scales at 135 pounds.

In a welterweight preliminary bout, unbeaten Alexis Rocha (15-0, 10KOs) weighed 146.4 pounds for his 10-round crossroads clash versus Brad Solomon, who hit the 147-pound mark on the second try. The Douglasville, Georgia native weighed 147.2 pounds on first try, before stripping down to make 147 without having to leave the stage.

Opening the four-fight stream, charismatic welterweight prospect Blair Cobbs faces Ghana's Samuel Kotey in a scheduled 10-round bout. Cobbs (13-0-1, 9KOs) weighed 145.8 pounds, while Kotey came in at a fit 146.4 pounds, yet in a feisty mood. Cobbs offered the Ghana native a bouquet of roses in the spirit of the passionate holiday, while Kotey promised to plant enough punches on his kisser to knock him out.