They haven’t seen live fights since March 13, countless cards have been postponed or canceled altogether, and none of the sport’s powerbrokers can even say with any authority just what the perpetually challenged boxing business will look like when this coronavirus crisis concludes. Amid all of this uncertainty, many boxing diehards at least could take some solace in the realization that the length of his pandemic probably would lead to Canelo Alvarez and Gennadiy Golovkin going at it next, rather than proceeding with planned interim matches before boxing a third time.

First, Alvarez was supposed to battle Billy Joe Saunders for the unbeaten British southpaw’s WBO super middleweight championship May 2 at T-Mobile Arena in Las Vegas. Five weeks later, Golovkin was expected to make a mandatory defense of his IBF middleweight title against Kamil Szeremeta on June 6 at an undetermined venue.

If Alvarez and Golovkin won those fights, they tentatively were going to fight again September 12. The site for their third fight wasn’t set, but the Dallas Cowboys’ AT&T Stadium in Arlington, Texas, was a potential destination.

The date and venue obviously could change because we don’t know when crowds will be allowed to gather in arenas and stadiums. Unlike some lower-profile fights, Alvarez-Golovkin III is not the type of event promoters could stage without fans in attendance because they would sacrifice entirely too much money at the gate.

Nevertheless, it at least appeared as if Alvarez and Golovkin wouldn’t waste time any more time before fighting a third time. For DAZN, which eventually could invest nearly $500 million combined in Alvarez and Golovkin, the distressed streaming service would at long last be able to offer subscribers the fight its decision-makers had in mind when they signed them.

That’s particularly important for DAZN during these trying economic times because it needs to provide premium content after being prevented from offering live events to its subscribers for at least three months.

Alvarez apparently is fine with going straight to a third Golovkin fight whenever it is safe and practical. But in an unforeseen twist to this nauseating narrative, now Golovkin doesn’t want to fight Alvarez next.

BoxingScene.com has learned from multiple sources that Golovkin’s representatives have informed DAZN executive chairman John Skipper that Golovkin still expects to fight Szeremeta, seemingly for no other reason than that was the plan prior to the whole world changing.

Johnathon Banks, Golovkin’s trainer, said as much during a recent interview with IFL TV.

“They called me about it, and I said no,” Banks said, referring to facing Alvarez next. “I said, ‘Why do I have to?’ Like the plan was for him to get this fight, get another fight, and then fight Canelo. Because when we went to Canelo and said, ‘We’re ready,’ he said no, don’t wanna fight. And he disappeared, and he went and did whatever he wanted to do and refused to fight. Now he’s saying, ‘OK, I’m ready. After this pandemic, let’s do it.’ No, I already have something planned. So, if you wanna do this, let me get this fight out the way. Then, if everything’s still a go, let’s come together.” 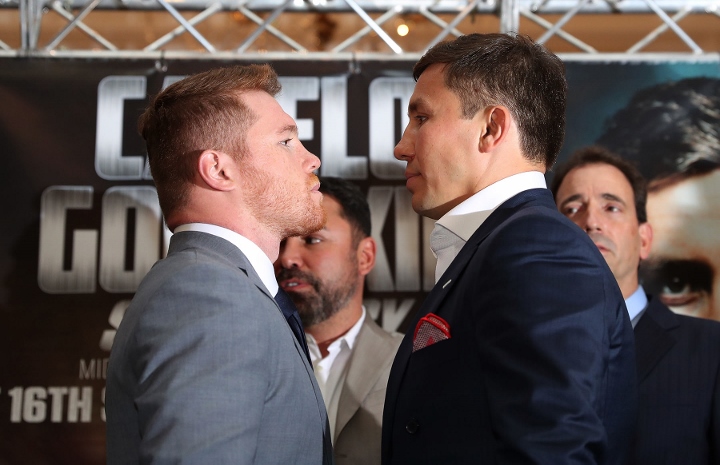 DAZN did commit to streaming Golovkin-Szeremeta. Skipper figured that mandated match would take place either late in the winter or early in the spring, but Golovkin suffered a calf injury that pushed it back.

That was before Alvarez agreed to fight Golovkin again. Alvarez’s ability to call such shots should bother a prideful fighter like Golovkin, but that’s the leverage that comes with being arguably boxing’s biggest active star.

His superstar status aside, Mexico’s Alvarez shouldn’t have been allowed to put off a third Golovkin fight, either, not when DAZN was paying him approximately $35 million per fight. Now that Alvarez has committed to doing it, though, the indisputable “B” side definitely shouldn’t stand in the way of that fight from happening next.

Skipper clearly cannot force Golovkin or Alvarez to fight each other, or anyone else. As the person responsible for approving opponents on DAZN, he does possess considerable control, however, when supposed partners don’t want to do what’s best for business.

It’s not like Skipper would be breaching Golovkin’s contract by offering him a lot more money for the biggest fight available. It is, after all, the shot at redemption Golovkin repeatedly has stated he wants more than any other fight, an opportunity Golovkin claimed he wouldn’t turn down if Alvarez agreed to do it.

Golovkin understandably doesn’t want to be stripped of the IBF middleweight title again. But DAZN desperately needs a high-profile fight like Alvarez-Golovkin III to generate subscriptions when boxing returns to its new normal.

DAZN already has paid Golovkin (40-1-1, 35 KOs) in the neighborhood of $15 million apiece for the first two fights of the six-bout contract he signed a year ago. The second of those appearances – an incredible brawl with Sergiy Derevyanchenko – gave DAZN subscribers plenty of value for their money.

But by the time they’re halfway through that deal, DAZN can’t have spent nearly $30 million combined for fights against Steve Rolls and Szeremeta, without Golovkin having fought Alvarez again. Not when there is more financial pressure than ever on the streaming service, which has furloughed a significant portion of its 2,700-employee workforce for three months.

Regardless, the IBF middleweight championship doesn’t make Alvarez-Golovkin more important. And the significant increase in his purse for fighting Alvarez, nearly twice as much as he’d make for facing Szeremeta (21-0, 5 KOs), should alleviate Golovkin’s disappointment if he is stripped for not fighting Szeremeta next.

If the Kazakhstan native were to beat Alvarez, he would be paid even more money for a fourth fight, assuming Alvarez would want to avenge that defeat. If Golovkin were to lose to Alvarez again, he’d still be guaranteed three more fights by DAZN, each of which would pay him eight figures.

If ring rust is Golovkin’s concern, Alvarez (53-1-2, 36 KOs) would have to overcome just about the same disadvantage if they fought next in September or later. Alvarez’s last fight, an 11th-round knockout of Sergey Kovalev, occurred only four weeks after Golovkin edged Derevyanchenko in their 12-round battle October 5 at Madison Square Garden in New York.

Beyond the money, the other number Golovkin and his team can’t ignore is 38, the age Golovkin turned April 8. Putting off another Alvarez fight for six more months or a year would only hurt Golovkin’s chances of winning.

There is a faction of boxing fans who believe Alvarez-Golovkin III already has surpassed its proverbial expiration date. They think the 29-year-old Alvarez, improved and in the heart of physical prime, will beat Golovkin convincingly in their third fight.

Those detractors would rather watch Golovkin fight Derevyanchenko again in what surely would be a riveting rematch. Golovkin wasn’t interested in facing Derevyanchenko a second time, even when Alvarez wasn’t willing to give Golovkin a chance to avenge his lone loss.

Now that Alvarez has changed his mind, Skipper can’t afford for Golovkin to turn down the fight he has wanted all along, too.