Almost one year ago to the date, DAZN staged its first ever United States-based card on Oct. 6 when Jessie Vargas fought to a majority draw with Thomas Dulorme.

That fight was the platform’s inaugural stateside show as part of the eight-year, $1 billion deal it signed with Matchroom Boxing. One week later, Golden Boy joined the cash caravan, highlighted by the unprecedented 10-fight, $365-million deal it signed for the star of the sport in Canelo Alvarez. Then, Gennady Golovin followed this March with a three-year, six-fight contract paying him upward of $100 million.

And so, a wild west-like scene began, where boxers broke the bank with exorbitant amounts of cash, all thanks to the digital global sports streaming offering. 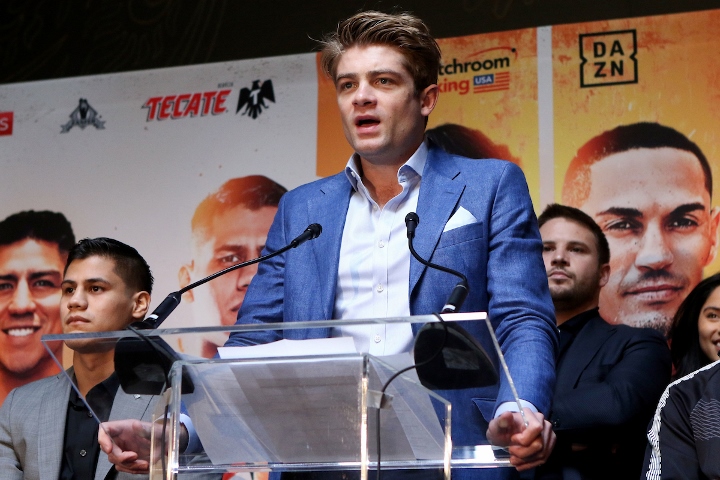 According to Joe Markowski, DAZN’s executive vice president of North America, the market and subsequent budgets will return back to a normal state now that they’ve matured past their infancy stage.

“In boxing, we’re learning. I’m starting to see a normalization of the boxing market. We’re not a money tree that you can continue to pluck at,” said Markowski. “In some cases, fighters were in the right place at the right time to strike lucrative deals. We needed to make those deals happen quickly considering our relatively new entry in the boxing landscape. Making fights will be easier going into 2020.”

Markowski said DAZN paid a market-entry premium in some cases, just as any new entrant would within any established business. They made short-term deals that got them through certain fights that otherwise would not have been possible.

“Much was made of the deal Golden Boy struck with Daniel Jacobs this year,” said Markowski. “Chatter and misreporting by various sources in the boxing industry made my job harder in finding Canelo an opponent.”

Some of the figures that were reported indicated that Jacobs would make up to $15 million for the Alvarez fight in May, and a minimum of $4 million in his next two fights should he lose to Alvarez.

Alvarez largely missed out on his traditional Mexican Independence Day weekend fight in September because opponents were seeking eight-figure compensation models much like the one Jacobs was able to secure.

“You have to be relatively agile and adapt to things that are beyond your control,” said Markowski. “Boxing is not the most organized relative to other major sports … Once you do a deal in boxing, that’s when the hard work starts in making fights. We’re a nimble enough business to adjust.”

The hurricane of cash DAZN spent should not come as a surprise. During a news conference last year to announce his unprecedented boxing-rights deal, Matchroom impresario Eddie Hearn stated: “This is open season for fighters in the United States … We've got the dates, the money and the platform to give you regular championship contests.”

“As a boxing-led business, we’re learning how to adapt our subscription-based models to a boxing-focused market and content offer,” said Markowski. “It’s very important to build out a longer-term schedule. We’re not a transactional business relying on singular events.”

DAZN will close the fourth quarter with arguably one of the strongest scheduling slates in recent memory.

Markowski would not dive into specifics as to how many subscribers they currently have, but he touted DAZN as the “No. 1 grossing sports app worldwide.”

“We are as a global business in an extremely healthy position,” said Markowski. “Our valuation is at a positive place, and we are happy with our North American and global performance.”

In 2020, Markowski and DAZN have their sights set on continuing to build a credible boxing vertical — only this time, on their terms and not succumbing to the monetary demands coming from the other side of the table.

[QUOTE=jimisawesome;20114226]Its great for fans because they are selling you 450 dollars (15 HBO 10 Showtime and two 75 PPV) for 100. But it is not a sustainable model. To keep this price level with their current costs they need to…

[QUOTE=jimisawesome;20114338]Google, Facebook, Microsoft, Apple all were profitable before their IPO. The companies that continue to burn money tend to fail. DAZN has no path to profitability in the US and never had a plan for all this money they are…

[QUOTE=Oldskoolg;20114303]Once again, people want(ed) haymon to fail because his success is not in keeping with racial hierarchy. If haymon does it, tear it down. If Hearn does it, build it up. That’s privilege, that’s entitlement of a system long designed…

[QUOTE=PotentialToast;20114228]They need to licence to pubs and bars.[/QUOTE] I watch mine on my phone at bars. Wonder if they would let me mirror it on a tv???

[QUOTE=DaNeutral.;20114290] They have spent alot of money as all start up businesses do and you cant honestly judge them on its 1st year. But the stable has been nicely built, have a couple of the biggest stars .[/QUOTE] Google, Facebook,…