LAS VEGAS – In the United Kingdom, Anthony Joshua-Alexander Povetkin is what the Brits consider a “massive” stadium event, comparable to a significant soccer match there.

A crowd in excess of 80,000 is expected Saturday night at Wembley Stadium, where Joshua will defend his IBF, IBO, WBA and WBO heavyweight titles versus Povetkin.

In the United States, Joshua-Povetkin is much more important in terms of how it’s broadcast to American fight fans. It is the first boxing main event for DAZN (pronounced Da-Zone), a new streaming service attempting to make its imprint in the most crowded broadcasting market in the world.

Having one of boxing’s biggest stars headline its inaugural show will test Americans’ willingness to begin paying another subscription fee to watch boxing. Most hardcore boxing fans already pay monthly subscription fees for premium cable networks HBO and Showtime and basic cable channels ESPN and FS1, as well as a $4.99 monthly fee for ESPN+, that cable giant’s streaming service.

DAZN costs $9.99 per month. It is offering a free one-month trial, though, to watch its boxing and mixed martial arts content through various connected devices, including game consoles, laptops, PCs, phones, smartphones, Smart TVs and tablets.

Depending on when you sign up, that free one-month trial could include several boxing cards.

Six days after the Joshua-Povetkin event Saturday, DAZN will stream the World Boxing Super Series’ super middleweight final Friday from Jeddah, Saudi Arabia. That fight will pit Brits George Groves and Callum Smith against each other for Groves’ WBA and IBO 168-pound championships and the WBSS’ Muhammad Ali Trophy.

DAZN’s free trial also could include an October 6 card from Chicago, in which welterweight contender Jessie Vargas will meet Thomas Dulorme in the main event, as well as an October 20 show from Boston, which will feature WBO middleweight champ Billy Joe Saunders against Demetrius Andrade in the main event.

The same night as Saunders-Andrade, DAZN also will begin broadcasting fights within the World Boxing Super Series’ bantamweight and cruiserweight tournaments from Orlando, Florida. DAZN also owns the broadcast rights to the WBSS’ super lightweight tournament, which will begin October 27 in New Orleans. 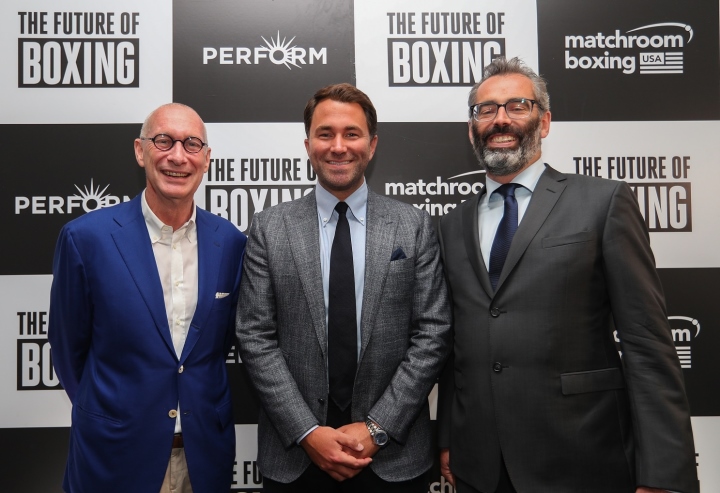 In all, DAZN has committed to offering at least 50 live boxing events each year.

“I think one of the challenges we face is boxing fans, some of them are probably thinking, ‘Who are these guys? What is this thing?,’ ” Markowski said. “But I think when we start showing the production quality and you start seeing what DAZN looks and feels like, the perception challenge we have I think will start to shift.

“I think you’re not far away from, before the end of this year or early into next year, seeing major pay-per-view-level fights on DAZN delivered in that standard – a free first-month trial and a rolling $9.99-per-month subscription. So no pay-per-view, but pay-per-view-quality fights. That’s what makes or breaks our business on the boxing side.”

Making what truly would be considered pay-per-view-level boxing events for its subscribers obviously will be easier said than done. Thus far, promoter Eddie Hearn, who’s working on DAZN’s behalf as part of an eight-year deal announced in May, has had difficulty luring established boxers away from other networks.

He has either made offers or expressed interest in welterweight champions Errol Spence Jr. and Keith Thurman, and former four-division champion Adrien Broner, one of the most proven ratings producers in the sport, among others.

Beyond Joshua and Amir Khan, both of whom have contracts with Hearn’s promotional company, Matchroom Boxing, Hearn has been able to secure DAZN deals with Vargas, Andrade, IBF light heavyweight champ Artur Beterbiev, IBF super featherweight champ Tevin Farmer, WBO junior welterweight champ Maurice Hooker, heavyweight contender Jarrell Miller, WBA super bantamweight champ Danny Roman and IBF women’s lightweight champ Katie Taylor. Those are all quality fighters, but those signings haven’t quite made the type of widespread splash fans and media might’ve expected when Hearn announced the DAZN deal could be worth as much as $1 billion during a press conference in Manhattan four months ago.

It recently made an aggressive bid to win the broadcast rights for the Eleider Alvarez-Sergey Kovalev light heavyweight rematch. The promoters for Kovalev (Kathy Duva) and Alvarez (Yvon Michel) ultimately chose to bring that fight to ESPN, which they chose over DAZN and HBO, which has televised each of Kovalev’s past 14 fights either live on that network or on pay-per-view.

Hearn will continue to take that ambitious approach to other attractive fights thanks to the deep pockets of Perform Group, the parent company of DAZN.

“We understand that Eddie Hearn can’t make the blockbuster, pay-per-view-level show every weekend,” Markowski said. “It’s impossible. The world of boxing can’t produce that. But we’ll work with a number of promoters to maintain a level of interest every month for a fight fan for them to see value in maintaining a subscription, and at a low price point of $9.99.”

DAZN – which plans to eventually broadcast more sports than boxing and mixed martial arts – has spared no expense in launching this ambitious venture in the United States.

It has made Michael Buffer, the famous ring announcer synonymous with big boxing matches, to an exclusive deal that only permits him to introduce fighters for DAZN cards. DAZN also has hired a broadcasting team that’ll feature former ESPN boxing analyst Brian Kenny as its blow-by-blow announcer and “Sugar” Ray Leonard as an analyst.

Perform Group’s investment also has enabled Hearn to pay substantial sums of money to the fighters willing to compete on an unknown platform.

Speculation persisted prior to an official announcement that DAZN would cost more than $10 per month.

It’s still twice as expensive as ESPN+, which offers more live events in a variety of professional and college sports. Markowski stressed, however, that it’s less expensive than HBO and Showtime per month and doesn’t cost much more for one year ($119.88) than what most cable and satellite subscribers paid to watch the Canelo Alvarez-Gennady Golovkin rematch Saturday night from T-Mobile Arena ($84.99 in HD).

“For the working man, $84.99 is a lot of money,” Markowski said. “And $9.99 is an amount of money that people pay in New York City for a beer or a small plate of food at a bar. It’s not an amount of money that is gonna impede people from joining the platform. We are all about the democratization of sport. We think you shouldn’t be impeded from consuming content because you can’t afford a $200-a-month cable subscription, plus a regular pay-per-view. That’s insane. It actually harms the sport long-term. Having a low price point of $9.99 engages you with fans, a younger base of fans, potentially, who may have spent their time on YouTube or elsewhere if we had priced it at a higher price point.

“From a business perspective, we wanted to make sure it’s an amount of money that people, even if they’re not watching it on a daily basis, because it’s a fight sport channel and by nature an event-based business model, they can live with parting with $9.99 a month. When they look at their bank statement at the end of the month, it’s not an amount of money that they say, ‘I’ve got to get rid of that.’ ”