David Price Hopes To Get Future Rematch With Sergey Kuzmin

David Price isn’t looking past the significant task of Tom Little for a second but admits he would love a second clash with unbeaten Russian Sergey Kuzmin.

The towering Liverpudlian (22-6-KO18) withdrew after four rounds of his September clash with Kuzmin (14-0-KO11) due to a bicep injury but is back in action on December 22 on the undercard of Dillian Whyte vs. Derek Chisora II.

With Little (10-6-KO3) in his sights, Price is fully focused on ensuring he stays in the mix in a thriving division. 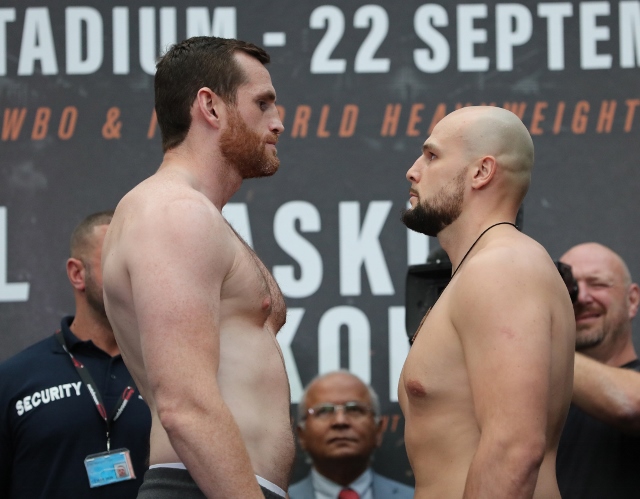 Price said: “As much as Tom and I are genuinely friends as far as boxing is concerned and get along well, we’ll put it all on the line on the night. It’s going to be an exciting fight.

“I’ve had intensive physio on the bicep. I’m fortunate in that it wasn’t a complete tear. It was something we were working on so I’m lucky that I’m able to start using it properly in time to fight again this year.

“The Kuzmin fight came in at late notice and things weren’t ideal but that’s gone now and I’m enjoying training. I’m looking forward to getting back into the ring and back into winning ways.

“It’s all well and good fighting on big shows but we’re in this sport to win and succeed. I’ve lost three of my last four and I want that winning feeling back.

“I’d love to fight Kuzmin again one day because I believe with proper preparation I could stand him on his head.”

Price is joined on a stellar bill at The O2 – broadcast live on Sky Sports Box Office – by MTK Global team-mate Charlie Edwards, who challenges Cristofer Rosales for the WBC world super-flyweight title.

There's always a reason with Price for why it didn't go great and how it will next time. It will be the same outcome. He's got dangerous power but not much else.

Call it day Pricey lad, before boxing calls time on you. The big scouser's got a right hand to rival Wilder early on; but the lack of defence, stamina, and fragile whiskers have been the most evident part of his…

Pricey ain't done yet, he's hungry to get sparked out once more. He's a promoter's dream in that fans are guaranteed a terrifying KO when Pricey is on the bill.

After Dave Knocks out Mr Little he will of outgrown the big stiff ruskie idiot!