Davey Oliver Joyce may already have had a fringe bauble to his name but he will be looking to add another when he returns to the ring in the first quarter of the new year.

The former WBO European featherweight champion, who was eliminated in the quarter-finals of the MTK Global ‘Golden Contract’ tournament in London back in November, will be back between the ropes on February 1.

Joyce was stopped by Commonwealth featherweight champion Leigh Wood at Bethnal Green’s famous York Hall venue, exclusively live on Sky Sports and ESPN +, as he suffered his first defeat in the paid code. 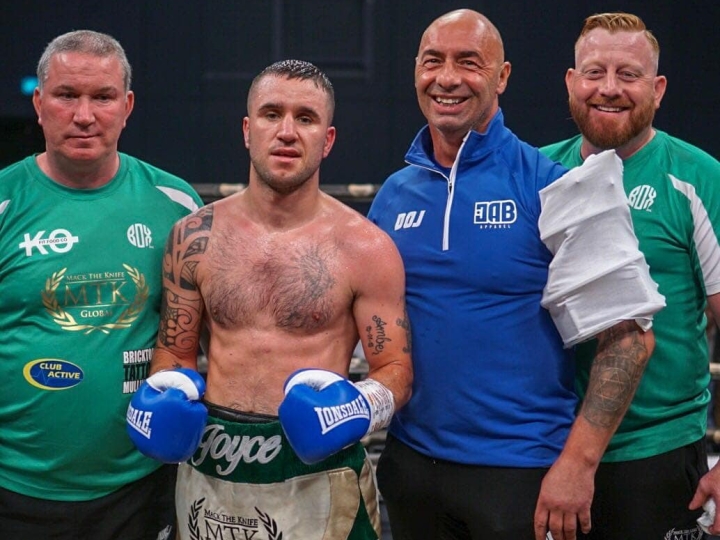 And the man from Mullingar (11-1, 8 KOs) will look to bounce back when he takes on Lee Haskins at Ulster Hall in Belfast, exclusively live on iFL TV worldwide.

The vacant WBO European title down at super-bantamweight will be at stake in Northern Ireland when Joyce faces the former IBF world bantamweight champion, from Bristol, who has a record of 36-4 with 14 quick.

“This fight will bring me back to where I belong and I’m working hard in the gym every day,” said Joyce. “I’ve made weight so easily at featherweight and now I’m moving down to super-bantamweight after making a few changes.

“I’ve watched Haskins fight Ryan Burnett and a few other ones he’s had. He’s not bad. He’s a southpaw as well and we have some of those in the gym who fight like that so I’m prepared for him.

“I’ve boxed his style all my life as an amateur so I know what to expect. Tyrone McCullagh will be sparring me in camp and it’s great to have him and Tyrone McKenna in camp for this one. We’ll all help each other.”

It was recently confirmed that both McCullagh and McKenna, who are in the featherweight and super-lightweight Golden Contract tournaments, have joined Joyce in teaming up with Pete Taylor.

The pair left Danny Vaughan after their quarter-final wins in the tournament and their first assignments under their new tutor will be revealed in due course.
Joyce, meanwhile, has boxed in Belfast before –– but he has yet to box at the Ulster Hall.

“Ulster Hall is just one of those ‘mega’ boxing venues,” he said. “It’s great to have my chance to get back to winning ways take place there.”

Super-lightweight talent Sean McComb meets Argentina’s Mauro Maximiliano Godoy in what is another step up in levels on the card, having beaten Godoy’s countryman Emiliano Dominguez Rodriguez at the same venue back in October, while there is action also slated for Steven Donnelly and Pierce O’Leary.

O’Leary must first get through a fight on December 20 at the Bolton Whites Hotel and if he is successful he will be joined on the card by the likes of Taylor McGoldrick, Gary Cully, Padraig McCrory, Dee Sullivan, Callum Bradley and Ruairi Dalton.