David Oliver Joyce has opened up following his battle with Ionut Baluta at York Hall over the weekend.

Joyce came up short in the fight, with Baluta coming out on top, and the Irishman has revealed he will sit down with his family to discuss his future. 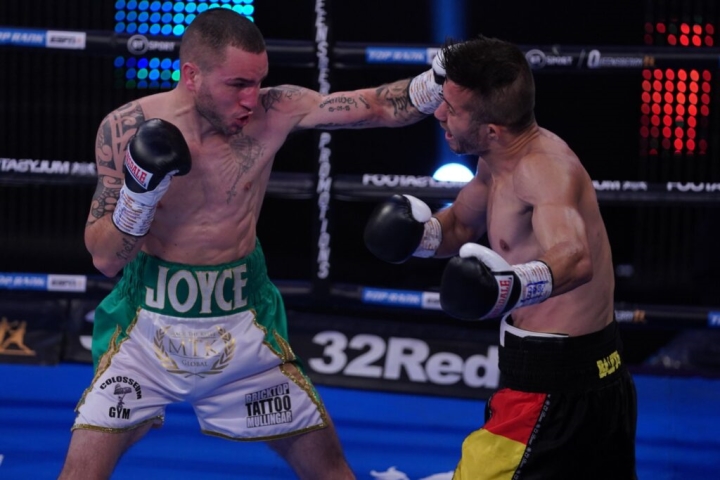 Joyce said: “It wasn’t my night on Saturday. I was starting to get going each round getting stronger and better. I was starting to go through the gears but just got caught with one of them shots so early in the fight and it was very hard to recover.

“I know each round I was going to start hurting him, and I could see it in them three rounds that each punch I was hitting him with was doing damage. Well done to Ionut Baluta, it was a great fight so congratulations champ I won’t take it away from you.

“I had an amazing camp and things went well. I have an amazing team around me over the past 17 weeks helping me in every way possible, but it was just one of them nights.

“I’m 33-years-old now and this is a young mans’ game and by god did I have a good one. I have to sit down with the wife and my team and think of the future.

“MTK Global have been so good two me over the past four years helping me so much. They have done everything possible for me. I call them family and will never forget them.

“I have been doing this since I was eight-years-old and did some amazing things along the way. I have been in unbelievable fights as an amateur and professional. I hope in any way I have not let you all down.

“I have four beautiful kids and a beautiful wife that I have been away for the past 17 weeks up and down to Dublin training. They have put their life on hold for me for so long. I’m just looking forward getting home and spending some time with them.

“Not forgetting putting their life through hell for the past 12 years as all they could hear was boxing this, boxing that, making weight here and there. We can’t have this we can’t go here.

“I won’t make any harsh decisions yet until I get home and sit down for a few days with the family and think of what’s the best for me and the family. Thank you all for the amazing support you all have given me as always and have been there since I started my career.”

[QUOTE=rudy;20784859]Anybody know why Top Irish Amateurs dont make it as a pro this is similar to Cubans going to America. He fought like a novice and got exposed Joyce. Waiting for the same to happen to Conlan[/QUOTE] Some might blame…

Anybody know why Top Irish Amateurs dont make it as a pro this is similar to Cubans going to America. He fought like a novice and got exposed Joyce. Waiting for the same to happen to Conlan