David Morrell will have much tougher nights in the office than this latest performance.

The rising super middleweight had his way with overmatched foe Mike Gavronski, scoring an early knockdown en route to a 3rd round stoppage Saturday evening at Shrine Expo Hall in Los Angeles, California.

Gavronski was floored in round one and out on his feet later in the bout, with referee Jack Reiss stopping the contest at 2:45 of round three in the 2020 season finale of Premier Boxing Champions (PBC) on Fox.

Morrell came out with knockout intentions from the start, establishing his dominance against a grossly out of shape and under-skilled Gavronski. The Cuban export—who now lives and trains in Minneapolis—was surgical with his uppercut and straight left hands, with Gavronski rocked off balance on several occasions.

A perfect opportunity to end the mismatch came late in round one. Morrell connected with a three-punch combination, the last of which was a straight left hand which sent Gavronski to the canvas. The fringe contender from Illinois by way of Bellevue, Washington beat the count and made it to the bell immediately thereafter, though there was concern all around for his well being.

Gavronski’s head trainer implored the boxer to not quit, poor advice considering the disparity in skill level. Morrell slowed down the tempo in round two, less active but still potent with his power shots as Gavronski was unable to offer little more than fighting heart.

The ringside physician was summoned by Reiss to visit the corner of Gavronski in between rounds. A lengthy observation resulted in allowing the boxer to continue though with the understanding that an inability to turn things around wouldn’t result in the fight lasting much longer than another round.

Gavronski took a beating in round three, one where Morrell was intent on closing the show. The Cuban southpaw would do just that, battering Gavronski around the ring and bloodying his nose. A head-jarring uppercut snapped back Gavronski’s head, prompting Reiss to jump in and stop the contest. 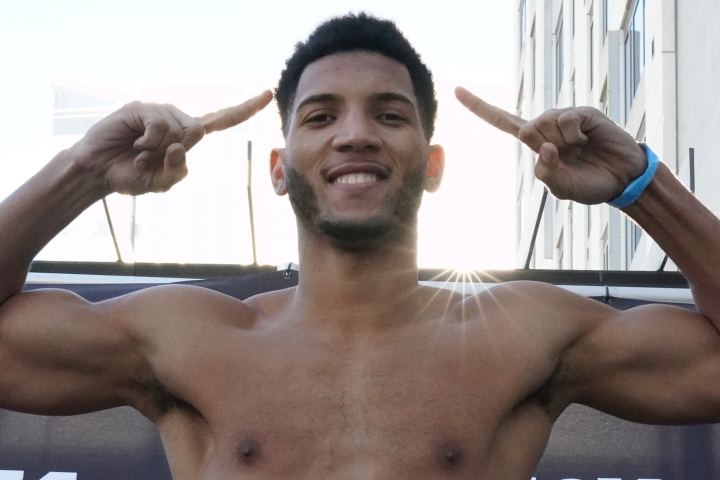 A two-fight win streak comes to a close for Gavronski, who falls to 26-4-1 (16KOs). Once intended as an interim title challenge, the fringe contender—who turns 35 later this month—landed just 12-of-128 total punches (9%) according to CompuBox statistics.

Morrell advances to 4-0 (3KOs) with the win, getting the job done with frightening precision. The 22-year old southpaw landed 102-of-208 total punches (49%) in registering his second straight win on Fox in primetime. Less than five months prior came a 12-round unanimous decision win over Lennox Allen to pick up an interim super middleweight title.

Saturday’s bout was previously billed as the first defense of that title, though Friday’s weigh-in results created a considerable amount of confusion.

The show’s original main event had former 154-pound titlist Julian ‘J-Rock’ Williams in his first fight since losing his unified titles as he was due to face former two-time title challenger Dennis Hogan. The fight was scrapped after Williams tested positive for COVID-19, with Morrell and Gavronski asked to fill the void on roughly three weeks’ notice.

The buildup throughout the promotion called for a 12-round title fight, although—unbeknownst to the public and even to the media prior to Friday evening—a clause in the contract called for the main event to be moved to a non-title fight at a maximum allowable 170-pound limit at any point.

False reports claimed that Morrell lost the title at the scale and that the vacant belt would be available only for Gavronski had he managed to win the fight. None of that was ever close to being true, as Morrell would retain his version of the super middleweight title no matter what transpired in the ring.

What takes place moving forward is entirely up to the unbeaten boxer.

Morrell is at a peculiar point in his career, just four fights in yet clearly far too advanced for fights such as this where he learns nothing. Boasting a 135-2 amateur record for his native Cuba before relocating to the U.S., it was deemed by his team—including head trainer Sankara Frazier, best known for his career-long work with interim welterweight titlist Jamal James—that he was ready to enter the title picture.

That move has been met with sharp criticism by many—including several fellow super middleweights—who feel it is too much, too soon and that he hasn’t earned his place in line.

“I take all of the criticism as motivation and inspiration,” Morrell admitted to BoxingScene.com. “I know a lot of people think this is too soon for me. They base that on my record, that I only [had] three fights.”

His in-ring presence dismisses such skepticism, in fact proving he’s clearly ready for the next level—though to what extent remains the question.

With the interim belt that came in his win over Allen this past August, Morrell is now on a path—in a sanctioning body sense—to one day enforce a title fight with four-division and reigning unified 168-pound titlist Saul ‘Canelo’ Alvarez following the latter’s Dec. 19 win over Callum Smith.

Such a fight remains highly unlikely to occur anytime soon, if ever at all. There is also, however, the likes of unbeaten titlists Caleb Plant (20-0, 12KOs) and Billy Joe Saunders (29-0, 14KOs), both of whom are high among the list of candidates to land a lucrative showdown with Alvarez in 2021. Alongside both of them resides unbeaten former two-time titlist David Benavidez (24-0, 21KO).

Should a fight with any of the aforementioned come about, Morrell promises to be game for the cause.

“When the time comes for a fight like that or against any of the super middleweights, I will be more than ready,” vows Morrell. “That’s a decision that will be made by my team, not something I’m going to force but one where I am willing to honor.

“Whenever that time comes to challenge the best in this division, I promise I will be ready to beat them all.”