David Lemieux Says 160 Still Possible, Move To 168 is No Problem

This past weekend in Canada, manager Camille Estephan had categorically indicated that it was David Lemieux's last fight at middleweight.

He said his boxer would make the jump to the super middleweight limit of 168-pounds.

Lemieux struggled to make the middleweight limit for a scheduled fight with Frenchman Karim Achour on Saturday. He came in two pounds over the limit and was docked 20% of his purse after being unable to get down any lower. 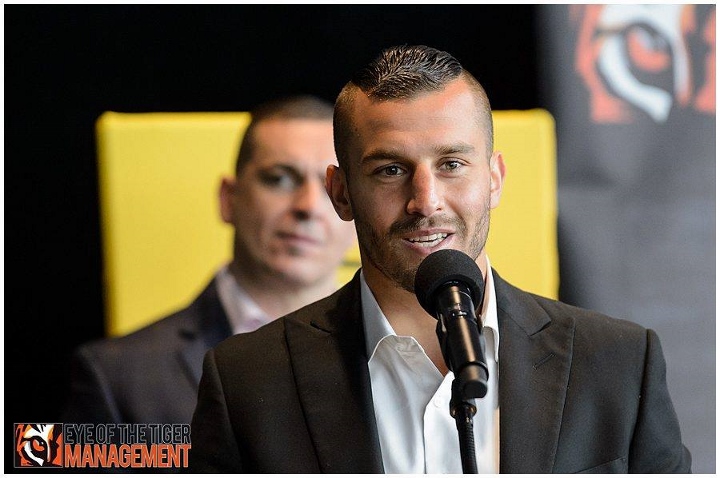 Despite the struggles to make weight, Lemieux (39-4, 33 KOs) still dominated Achour (26-5-3, 4 KOs) over twelve rounds and scored a knockdown in the twelfth.

Lemieux's trainer, Marc Ramsay, says a jump to 168-pounds is certainly possible, but he believes his boxer could still remain at the middleweight limit.

"We will see. There were a lot of things that were said during the week under the influence of emotion," said Ramsay to the Canadian Press.

Lemieux has no problem with either direction.

"I'm going to review [my options] with my team. Certainly there are adjustments to make," said Lemieux.

If ever Lemieux had to go to the super middleweight, Ramsay believes that he has the qualities to do well.

"He certainly has the power to do it. Obviously there will be a little adaptation period, but that will be my job at the gym. [Lemieux's height of 5'9] is a small problem, but boxing is the kind of thing that you have to learn to manage. David is a pressure boxer who likes to go on the offense. He always tries to get closer to the target, so it's a job that's natural for us," Ramsay said.

Sure he can make 160 strong, he's just being a lazy fecker, hes never that lean, he will be a complete midget at 168

[QUOTE=G G G;18812422]If he implements a decent jab into his arsenal, Lemieux would be a contender. He uses hooks to shorten distance, gets caught with shots and tired in the process. Jab, jab while moving forward and then hooks.[/QUOTE] It’d…

[QUOTE=Megamasterking;18812392]Grant was a pro boxer here in Quebec, so I made a mistake with the unknown Brant name. Happy now?[/QUOTE] Ah ok, my apologies! Honest mistake!

[QUOTE=jmrf4435;18812504]Rob brants skills? He got pretty dominated and embarrassed against Braemer................I think Lemeuix might viciously KO him into and early retirement[/QUOTE] Braemer would beat Lemieux

[QUOTE=Julia Slobberts;18812291]It seems like he's definitely gatekeeper status at this point. I'd be interested to see Rob Brant test his skills against Lemieux.[/QUOTE] Rob brants skills? He got pretty dominated and embarrassed against Braemer................I think Lemeuix might viciously KO him…