David Lemieux Fails To Make Weight, Move To 168 is Eyed

Back in December, it may have been the last time that former IBF middleweight champion David Lemieux (38-4, 33 KOs) competed at 160-pounds.

Earlier today, Lemieux failed to make the middleweight limit - coming in at 162-pounds, for his scheduled fight on Saturday night in Quebec City. 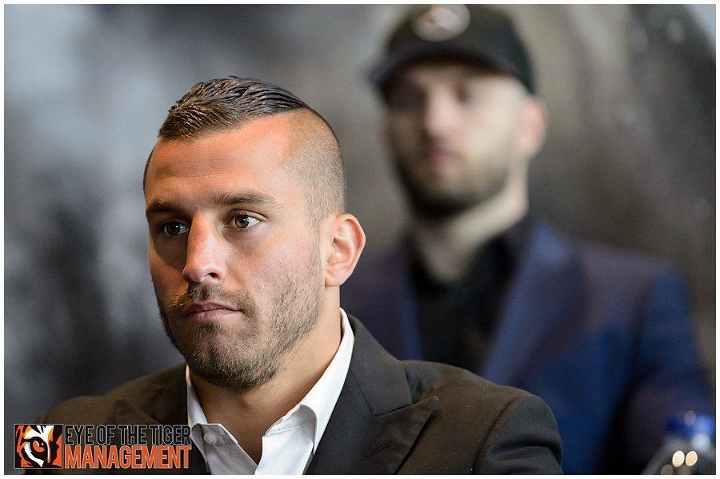 While the 29-year-old boxer was unable to make the limit, Achour scaled in at 159 pounds, a full pound under the limit.

Lemieux was given time to get down in weight and come back.

But after less than an hour, Lemieux's promoter and manager Camille Estephan of Eye of The Tiger Management, advised the local officials that his boxer would not be fighting at 160.

Lemieux is attempting to bounce back after suffering a one-sided twelve round decision loss to WBO middleweight champion Billy Joe Saunders back in December.

Estephan told local reporters that he wants Lemieux to move up to the super middleweight limit of 168-pounds - because he's concerned about the physical hell that Lemieux endures while squeezing down to the middleweight limit.

Lemieux fought above the middleweight limit in two of his last four bouts.

At just a shade over 163-pounds, Lemieux dominated Cristian Fabian Rios over the ten round distance.

He then came back, at the middleweight limit of 160, and scored a 'Knockout of The Year' victory with a third round demolition of Curtis Stevens in New York.

Lemieux then decided to make a quick return in May, at 163-pounds, and won a ten round decision over Marcos Reyes. That contest took place on the pay-per-view undercard to Canelo vs. Chavez Jr. at the T-Mobile Arena in Las Vegas.

And then came the loss to Saunders, which Lemieux partially blamed on a nagging shoulder injury.

He's already too small for the 160 let alone 168. He's growing horizontally, not vertically, which is unfortunate. His style of having to chase his opponent to get inside won't be changing any time soon.

[QUOTE=KingHippo;18805347]What did I prove you focking idiot? Camping in a sh1t division for 12 years THEN talking about retirement when you're having a little competition is a b1tch move. Not when you're pushing 40, beaten a few HOFers/P4P fighters and…

[QUOTE=KingHippo;18804931]Shut the fock up you hypocrite piece of sh1t. Crawford cleaned up 140 and nobody gives a fock. You go where the best are, end of story. Stop making up new rules to accommodate chumps who hide in sh1tty divisions.[/QUOTE]…

Achour should be getting some dollars from Daniel's paycheck since he didn't make weight... it's the only fair thing to do...