David Haye Will Help Parker With His Preparation For Whyte

Former WBO heavyweight world champion Joseph Parker will get a big assist from his friend David Haye, as the New Zealand superstar will prepare for his upcoming showdown with Dillian Whyte.

The contest takes place at The O2 on July 28, live on Sky Sports Box Office.

Haye has opened up the doors to his gym, where Parker will prepare for the showdown with Whyte. 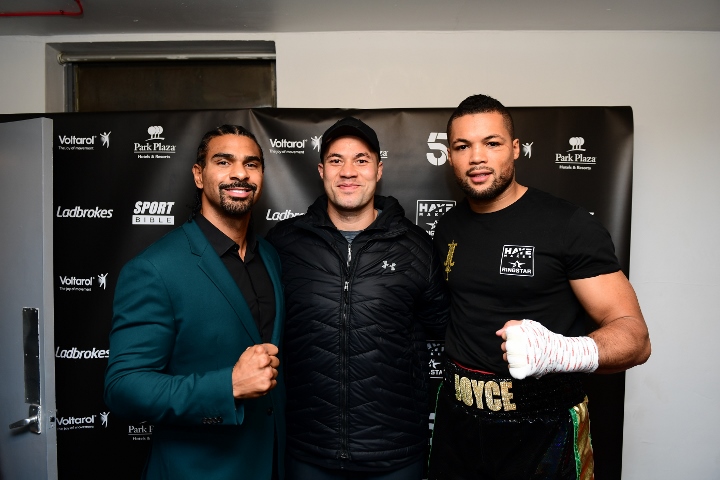 Parker used Haye's gym for the March unification with Anthony Joshua - who won a twelve round unanimous decision and walked away with the WBO, WBA, IBF, IBO world titles.

Parker and his handlers are very grateful that Haye allows them to use his facilities.

"David seems to have been very good to us from our first fight up there. David's been very helpful, we're very grateful," Parker's promoter, David Higgins, told Sky Sports.

"David has been very accommodating. I'm sure that he and Joseph will discuss tactics and stuff like that. The use of the facilities has been invaluable, they are private, hidden and quiet, and near the hotel."

Higgins has no doubt that Haye's assist will further enrage Whyte, who already threw a few verbal punches at Parker.

"I think that Dillian Whyte's permanently p****d off," said Higgins. "He's a fiery sort of guy and it will be interesting to see how that goes in the ring.

"I'm sure Dillian does understand that Joe does need to use a gym. It's business and Haye understands that it's business. Everyone likes Joseph, he's a likeable guy. Haye and our team get on well."

The winner of Parker vs. Whyte will be a frontrunner to face Joshua in the near future. Whyte was stopped by Joshua in seven rounds back in 2015. The next defense for Joshua is being positioned for September, against WBA mandatory challenger Alexander Povetkin.

Parker may benefit more from some time with Ismael Salas?

Yeah this is standard stuff

It’s really a non story. Hatton and Khan always open their gyms to fighters coming here to fight too. Gyms in every country do the same

It's a good crap to prepare for the fight... This fight is a very big one for whyte. ...War whyte war...

Teach him how to get banged out Whyte will bully Parker