The random test was given to Benavidez as part of his enrollment in the World Boxing Council's Clean Boxing Program.

The sanctioning body is likely going to fine Benavidez. Because the substance in question is a recreational drug, a suspension may not be needed. 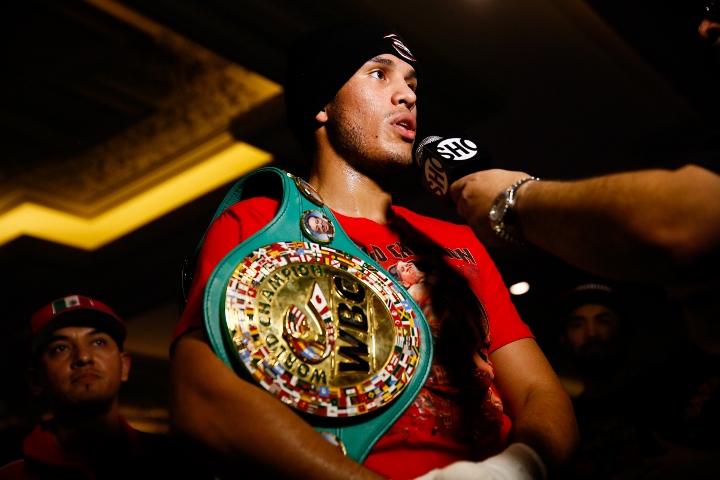 Benavidez is not making any excuses and apologized for the incident.

"I would like to sincerely apologize to the WBC for my actions. I am embarrassed to have this happen. And to my all my fans that I lost the respect of, I know a lot of people won’t see me the same but I am young and it was a mistake on my behalf," Benavidez said.

On May 21, the World Boxing Council had ordered them to fight, and a purse bid, scheduled for June, was canceled after both sides reached a deal.

Last year, Benavidez and Dirrell were scheduled to fight each other for the vacant WBC title - but Dirrell withdrew with an injury, and he was later replaced by Ronald Gavril.

Dirrell holds the number 2 ranking under the WBC. Callum Smith, who is part of the World Boxing Super Series tournament, is ranked at 1.

Dirrell previously held the WBC title and lost the belt by way of a close twelve round majority decision to Badou Jack in April of 2015.

Since that loss, he's won five fights in a row - with a dominating decision earlier this year over Abraham Han.

Benavidez retained his world title back in February, when he won a dominant twelve round decision in his rematch with Ronald Gavril.

Kind of makes me sick the message kids get from boxing when a champion uses an “ILLEGAL” life destroying substance like cocaine...and they say...”well, it’s a recreational drug so he won’t get suspended or punished for it.” So kids, it’s…

[QUOTE=larryxxx..;19120640]did he have a prescription and tell the commission about it?[/QUOTE] Or are you referring to Chavez? I have no idea. But even if he had a script it wouldn’t have mattered because it’s based on where the fight takes…

[QUOTE=larryxxx..;19120640]did he have a prescription and tell the commission about it?[/QUOTE] The Ricky Williams thing? Happened about ten years ago or so. He got a one year suspension and came to play in the CFL. I remember it blew my…

[QUOTE=_Rexy_;19118480]I have no idea. It's not like dude smoked a spliff in his dressing room before the fight. It's a medication and should be treated as such. I think it's dumb, like the NFL suspending Ricky Williams for a season…