David Benavidez: I Want To Drill Love, Send Message To All at 168

Former WBC super middleweight champion David Benavidez is promising to do a real number on J'Leon Love on Saturday night.

The contest takes place as part of the Errol Spence vs. Mikey Garcia Fox Sports Pay-Per-View undercard, taking place at the AT&T Stadium in Arlington, Texas.

For Benavidez (20-0, 17 KOs), the contest is his first since last February's domination of Ronald Gavril. 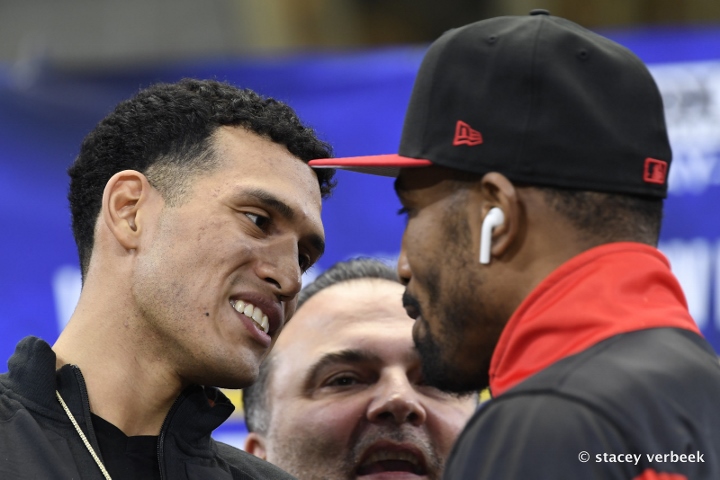 A few months after the contest with Gavril, Benavidez tested positive for cocaine during an out of competition random drug test.

He was suspended for several months and stripped of the WBC belt, which he wants reclaim sooner than later.

"We've trained very hard for this fight. Without my father Jose, I wouldn't be here in this great position. I'm excited to fight at this stadium in front of all these fans. I'm looking forward to doing the same thing to J'Leon that I did to Rogelio 'Porky' Medina. 'Porky' knocked him out, so you know what I'm going to do to Love," Benavidez said.

"I trained for J'Leon Love like he was a world champion. I've been working with champions this whole training camp, so I'm ready to go in there and take him out. I'm going to leave the fans entertained. I know that there are a lot of things that I can exploit in Love's game. I'm going to be way faster and tougher than anyone he's faced.

"I've felt like I was at home all week. I've had amazing support and I'm ready. My weight is on point. This is the opportunity of a lifetime and I have to capitalize on it. I've been on sidelines and seen other people get their glory. Love's time has passed already. I've seen him fight when I was a teenager and I feel like I have to send a message of what I'm going to do to J'Leon Love so that I can send a message to the rest of the division."

[QUOTE=mrlopez;19584457]Benavidez is head and shoulders above damn near everyone at 168. Not sure what u cant comprehend[/QUOTE] Don't think I'm the one thats having trouble comprehending. If you actually read my post you would see I'm commenting on Benavidez "sending…

[QUOTE=Nusky;19584292]How the f--- are you going to send a message to 168 division by beating a clearly washed/never was in Love? Wtf is Wrong with these fighters? Do they really believe the bulls--- that comes out of their mouths? And…

How the f--- are you going to send a message to 168 division by beating a clearly washed/never was in Love? Wtf is Wrong with these fighters? Do they really believe the bulls--- that comes out of their mouths? And…

David Buenavides is a drug addict...