David Benavidez: A Fight With Me & Canelo Would Be Explosive!

David Benavidez was originally scheduled to have a homecoming fight on April 18 that has since been cancelled due to coronavirus.

The 23-year-old WBC champion Benavidez (22-0, 19 KOs), however, wants to order a more palatable opponent to be booked other than Roamer Alexis Angulo.

During a reddit “Ask Me Anything” session with fans, Benavidez said he was unhappy with matchmaking after such a dominant, crown-clinching performance against Anthony Dirrell in September, and feels that he should’ve been offered a much tougher test than the No. 15 WBC-ranked, 36-year-old Colombian.

“You know, I wasn't [happy with the matchmaking]. I really wasn't,” said Benavidez. “But because I had three other fighters pull out, we had to go with him. Originally it was a No. 1, with the Turkish guy Avni Y?ld?r?m, then he got injured and two fighters pulled out after that, so that's why we landed on [Roamer Alexis Angulo].” 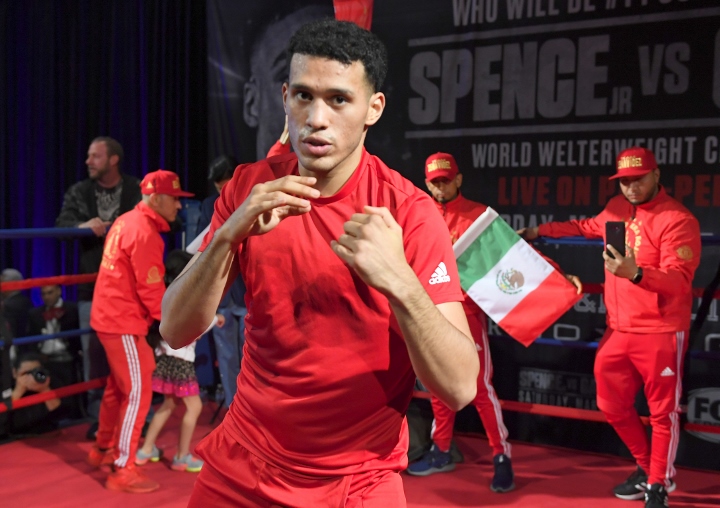 Angulo (26-1, 20 KOs) is a former world title challenger whose lone career loss came to Gilberto Ramirez in 2018 by unanimous decision. He would have been coming off a surprising split decision win over then-undefeated prospect Anthony Sims Jr. in January. It remains to be seen whether talks will be reignited with Angulo once the boxing calendar resumes.

If Benavidez had it his way, in addition to IBF champ Caleb Plant, he would challenge boxing’s biggest breadwinner and one of its pound-for-pound best in fellow countryman and secondary 168-pound WBA titlist Canelo Alvarez.

“I feel like a fight with Canelo would be an explosive fight, fan-friendly fight,” said Benavidez. “We're both brawlers, Mexican fighters. My advantages [is that] I'm taller, have a longer reach. I feel like this is my one big opportunity to show the world who I am, so I don't feel like this means as much to him as it does to me.”

[QUOTE=ShoulderRoll;20514881]That's what Mexicans are, isnt it? Native blood mixed with Spanish blood? That's why they aren't called Aztecs or Spaniards...they are called Mexicans.[/QUOTE] What Mexicans are is tough and resilient. Same goes for many other ethnical groups.

In sorry David but its look like Canelo is not going to take the risky direction towards you...

[QUOTE=Caxcan;20516608]People are really getting into the weeds on this racial conversation, so to add a curveball-- David is actually half Ecuadorian from his mother but apparently identifies more with his Mexican side.[/QUOTE] Yeah he also has Cuban blood. People get…